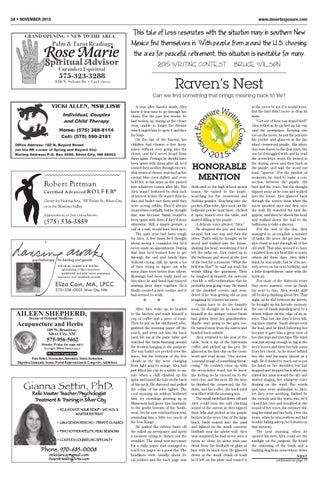 GRAND OPENING • NEW TO THE AREA

This tale of loss resonates with the situation many in southern New Mexico find themselves in. With people from around the U.S. choosing the area for peaceful retirement, this situation is inevitable for many. 2015 WRITING CONTEST • BRUCE WILSON

Can we find something that brings meaning back to life? A year after Sarah’s death, Alex knew it was time to go through her closet. For the past few weeks, he had woken up staring at the closet door, unable to forget the dreams which urged him to open it and face his fears. On the day of the funeral, her children had chosen a few keepsakes without ever going into the closet, and he’d never heard from them again. Perhaps he should have been upset with them; after all, he’d nursed their mother through two terrible years of chemo, watched as her crystal blue eyes dulled, and even held her in his arms as she passed into whatever comes after life. But Alex wasn’t bothered by their lack of interest in him. He wasn’t their father and hadn’t met them until they were young adults. They’d always treated him cordially, but he thought that was because Sarah would’ve been upset with them if they’d done otherwise. Still, a simple gesture, a call or a visit, would have been nice. The past year had been rough for Alex. A few times he’d thought about seeing a counselor, but he’d never made an appointment. During that time he’d learned how to get through the sad and lonely days without crying; still, he spent a lot of time trying to figure out why some days were better than others. Mornings had been really hard on him since he and Sarah had enjoyed starting their days together. He’d finally created a new routine and it had seemed to work. v v v

After Alex woke up, he headed to the kitchen and made himself a cup of coffee and a piece of toast. Then he put on his old flannel robe, grabbed the morning paper off the porch, and went out into the back yard. He sat at the patio table and watched the birds flurrying around the feeders hanging in the junipers. The sun hadn’t yet peeked over the fence, but the bottoms of the few clouds in the sky were changing from light gray to orange. Alex had just lifted his cup in a salute to nature when a chill climbed up his spine and raised the hair on the back of his neck. He shivered and pulled the collar of his robe tighter. The cool morning air seldom bothered him; icy mornings growing up in Minnesota had given him immunity to the gentle breezes of the Southwest. Yet the raw cold had been real, reminding him a little too much of the Iron Range. He pulled the rubber band off the rolled up newspaper and spent a moment trying to flatten out the wrinkles. The ritual was necessary for a daily paper that managed to reach ten pages on a good day. The headlines were usually about local politics and the back page was

HONORABLE MENTION dedicated to the high school sports teams. He turned to the inside, searching for the crossword and Sudoku puzzles. Reaching into the pocket of his robe, Alex took out the ballpoint pen he kept there, clicked it open, leaned over the table, and started filling in the puzzle. A delicate voice uttered, “Alex.” He dropped the pen and turned around, first one way and then the other. That’s odd, he thought, as he stood and walked into the house, shaking his head, wondering if he’d left the radio on. Alex ended up in the bedroom and stood at the foot of the bed for a moment. “What the hell was that?” he said out loud, his words filling the quietness. Then he laughed at himself, the nervous chuckle a self-confirmation that he probably was going crazy. He stared at the jumbled covers, and wondered if he was getting old or just imagining he’d heard his name. Gonna have to do the laundry soon, he thought as he looked at himself in the antique mirror Sarah had gotten from her grandmother. Maybe start going to the gym too. He turned away from the mirror and headed back outside. Alex returned to his seat at the table, took a sip of the lukewarm coffee and picked up the pen. He glanced at the first clue on the crossword and read aloud, “One across, ‘a mental image of something threatening.’” He couldn’t come up with the seven-letter word, but he knew the feeling, so he moved on to the next clue, and the next. By the time he finished the crossword, the Sudoku, and his coffee, the back yard was filled with the morning sun. The small birds had flown off and Alex could hear the odd clucking sound of the ravens as they tapped their bills and picked at the purple berries in the trees. One of the large black birds soared into the yard and lighted on the small concrete birdbath near the adobe wall. Alex was surprised; he had never seen a raven so close, let alone seen one drink from the birdbath or glare at him with its black eyes. He glanced down at the small chunk of toast he’d left on his plate and tossed it

at the raven to see if it would leave. But the bird didn’t move or drop its stare. “Get out of here you stupid bird!” Alex yelled as he picked up his cup ;and the newspaper. Keeping one eye on the raven, he put the pen into his pocket and glanced at the finished crossword puzzle. His attention was drawn to the first entry, the one he’d struggled with, and he read the seven-letter word. He looked at the staring raven and then back at the puzzle, and said the word out loud, “specter.” For the briefest of moments, he tried to make a connection between the puzzle, the bird and the voice, but the thought slipped away as he rose and walked into the house. Alex glanced back through the screen door when the raven quorked once and flew over the wall. He watched the bird disappear, and then he shook his head and walked down the hall to the bathroom to take a shower. For the rest of the day, Alex managed to accomplish a number of tasks. He never did get into Sarah’s closet to sort through all of her old stuff. That plan seemed to have vanished from his head like so many others did these days. Alex didn’t think he was senile, but he’d be seventy-seven on his next birthday, and a little forgetfulness came with the territory. For most of the thirty-six years they were married, even as Sarah lay next to him, Alex would drift off to sleep thinking about her. That night, as he slid between the sheets, he brought up his favorite memory, the one of Sarah standing next to a desert willow on the edge of an arroyo. That hot day they’d been hiking since sunrise. Sarah always took the lead, and he liked following her because it gave him a great view of her slim legs and trim hips. The wind was just strong enough to tug at the tree’s leaves and blow her hair away from her cheek. As he stood behind her, she said his name almost as a sigh. He’d started to reach out to put his hand on her shoulder, but had stopped and stepped back when she raised her arms toward the sky and started singing, her whispery voice floating on the wind. The words and tune were unfamiliar to Alex, yet they were soothing. Bathed by the melody and the warm sun, he’d closed his eyes and breathed in the sound of her voice, the memory stirring his mind and his body. Over the years, when he was restless and had trouble falling asleep, he’d drawn on that memory. The next morning, when he opened his eyes, Alex could see the sunlight on the junipers. He heard the chittering of the birds and a barking dog from somewhere down 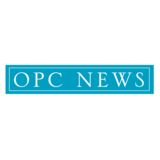