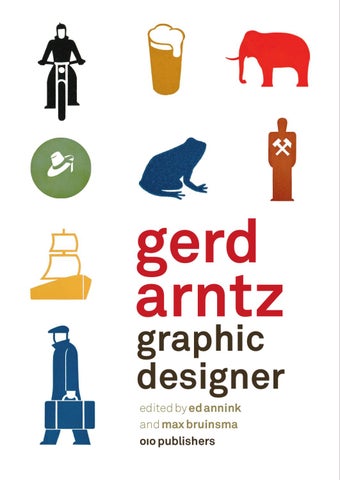 Gerd Arntz in his Vienna studio, drawing the symbol ‘unemployed’, 1931.

Born in a German family of iron manufacturers, Gerd Arntz decides early in his life to take a different course and become an artist. In Düsseldorf, where he lives since his nineteenth, he joins a movement which wants to turn Germany into a Raden Republik (‘council republic’), a radically socialist state form based on direct popular democracy. As a socially inspired and politically committed artist, Arntz joins the Cologne based ‘progressive artists group’ (Gruppe progressiver Künstler Köln) and depicts the life of workers and the class struggle in ­abstracted figures in woodcuts. Published in small avant-garde magazines, his work is noticed by Otto Neurath (1882-1945), an economist and social scientist and founder of the Museum of Society and Economy (Gesellschafts- und Wirtschaftsmuseum) in Vienna, Austria. Neurath had developed a method to ­communicate complex information on society, economy and politics in simple images. For his ‘Vienna method of visual statistics’, he was looking for a designer who could make ­ ictograms that could summarize a subject ­elementary signs, p at a glance. In 1926, the museum takes part in the international exhibition ‘GeSoLei’ (Gesundheitspflege, soziale Fürsorge und Leibesübungen – health care, social care and gymnastics) in Düsseldorf, Germany. Concurrently, the young artist Arntz presents his latest work in the same city, showing wood-cuts such as Mitropa, a critical commentary on class society. ­Although at the time Arntz is unaware of Neurath’s theories, his style mirrors the Viennese economist’s principles of clarity and ‘legibility’. Neurath visits Arntz’s exhibition and sees the

Print and linoleum-cut of an Isotype symbol by Gerd Arntz, 1930’s, from the Arntz archive, now at the Gemeente­ museum, The Hague. The original lino show the precision of the craft work in the expressive traces of the gouge. The print next to it is a proof made by Arntz.

As a model for visual statistics, the atlas is a success. In 1931, this leads among other things to an invitation to come to the

The most notable publication of the museum is the loose-leaf collection of a hundred charts in the Atlas Gesellschaft und Wirtschaft of 1930. The ‘atlas’ is a text book example of the ‘Vienna method’ to present generally accessible information with the aid of images, regardless of language barriers. It is Neurath’s and Arntz’s major collection of visual statistics, and was used as Elementarwerk, meaning as an example of how to make complex information accessible, using a standardized visual language. The 100 charts conjure up an image of populations of countries and continents, of world powers and their political and military relations, of trade and industry, the growth of cities and their social structure and workers’ conditions. Everything is systematically visualized in directly recognizable diagrams.

which frequently were students of the Bauhaus, where Neurath occasionally lectured. The museum’s printing workshop was equipped with two presses for printing hand-set type, clichés and the linocuts, and manned by three printers/typesetters. In addition, there was a photographer handling the enormous technical camera, and a carpenters’ shop where models and other objects for the exhibitions were manufactured. All in all, it was a lively and extended workshop, in which Gerd Arntz acted as design director.

Meanwhile, Otto Neurath tries to help his old comrade from London, but can’t prevent that Arntz spends the best part of 1945 and ’46 as a prisoner of war. When, after more than three years, he enters the Netherlands again, he is immediately ‘put in holding’ as an alien. It takes a phone call from CBS ­director Idenburg to the Minister of Justice to release him the next day.

After the war, the Foundation more and more focuses on ­consumer and market research, working mainly in commission for such clients as the building and chemical industry, the Bijenkorf department store, the economic communication department of the Dutch government and Unesco. Arntz continues to work as he did before the war, although in terms of its original intentions, the output of the Foundation constitutes a breach with the Mundaneum era. Still, Arntz and his assistants pride themselves in delivering well-designed visual statistics according to the Isotype method. Meanwhile, he continues working on his ‘free’ expressions, although the overt political messages become more veiled. He takes on ­illustrating classics such as Ovid’s Metamorphoses and ­Voltaire’s Candide, and reinterprets old themes such as the ‘Dance Macabre’ and the ‘Ship of Fools’. The ideological drive to criticize the powers that be, which inspired his earlier work, is now translated into a mature insight in the condition humaine.

Structural drawing of the symbols for man and woman, showing their proportions.

Gerd Arntz: ‘In this print, the masses who can’t buy anything are depicted on the lower right side. On top, left, are the represen­tatives of agriculture and industry, who have allied with a clerk – identifiable by his wallet with an eagle on it. ­Although a neutral figure invites the masses to purchase, the poor can buy things only in their dreams. The dollar sign symbolizes the ‘brake’, the impossibility for them – unlike the rich – to acquire the goods.’ (Gerd Arntz. De tijd onder het mes)

The International System Of TYpographic Picture Education (ISOTYPE) was developed by Otto Neurath as a method for visual statistics. Gerd Arntz was the designer tasked with making ­Isotype’s charts, pictograms (Signaturen) and visual signs. Many of Neurath’s contemporaries rendered proportions by varying the size of their symbols. But according to Neurath’s Isotype rules, more or less are not represented by bigger or smaller symbols, but by more or less symbols, each symbol representing a specific amount. In this manner, relations can be read more easily and exactly. Apart from being an acronym, ‘Isotype’ is also Greek for ‘the same sign’. By developing a standard for visually representing information, Neurath and Arntz changed a style of illustration into a coherent visual ­language for making ‘visual texts’. Presented on the following pages are several statistics from the atlas Gesellschaft und Wirtschaft – Bildstatistisches ­Elementarwerk (printed and published in Leipzig, 1930); statistics from the book Modern man in the making (New York, 1939); and charts made for various clients, such as the Dutch Central Bureau for Statistics.

How long do animals live?

What could one buy for one guilder? Published in ‘Wie Wat Waar’ (Who, What Where?), statistical yearbook, 1947

The ‘Who, What, Where’ yearbooks were published since 1937 till the mid-1980s (with the exception of 1945 and 1946). These books listed the year’s most prominent people, the most important events and where they happened. Apart from the facts and figures of the time, they also featured background articles on a wide range of topics. This graph shows the impact of the war on household budgets. 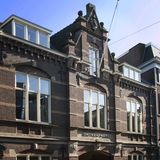