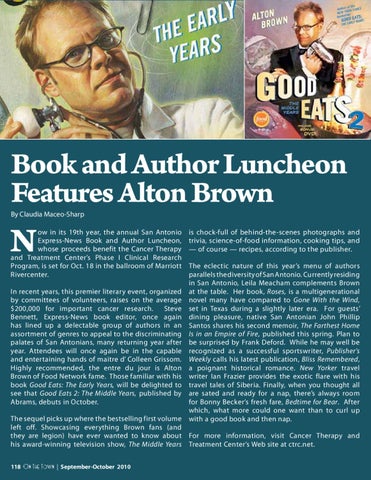 ow in its 19th year, the annual San Antonio Express-News Book and Author Luncheon, whose proceeds benefit the Cancer Therapy and Treatment Center’s Phase I Clinical Research Program, is set for Oct. 18 in the ballroom of Marriott Rivercenter.

is chock-full of behind-the-scenes photographs and trivia, science-of-food information, cooking tips, and — of course — recipes, according to the publisher.

The eclectic nature of this year’s menu of authors parallels the diversity of San Antonio. Currently residing in San Antonio, Leila Meacham complements Brown In recent years, this premier literary event, organized at the table. Her book, Roses, is a multigenerational by committees of volunteers, raises on the average novel many have compared to Gone With the Wind, $200,000 for important cancer research. Steve set in Texas during a slightly later era. For guests’ Bennett, Express-News book editor, once again dining pleasure, native San Antonian John Phillip has lined up a delectable group of authors in an Santos shares his second memoir, The Farthest Home assortment of genres to appeal to the discriminating Is in an Empire of Fire, published this spring. Plan to palates of San Antonians, many returning year after be surprised by Frank Deford. While he may well be year. Attendees will once again be in the capable recognized as a successful sportswriter, Publisher’s and entertaining hands of maitre d’ Colleen Grissom. Weekly calls his latest publication, Bliss Remembered, Highly recommended, the entre du jour is Alton a poignant historical romance. New Yorker travel Brown of Food Network fame. Those familiar with his writer Ian Frazier provides the exotic flare with his book Good Eats: The Early Years, will be delighted to travel tales of Siberia. Finally, when you thought all see that Good Eats 2: The Middle Years, published by are sated and ready for a nap, there’s always room Abrams, debuts in October. for Bonny Becker’s fresh fare, Bedtime for Bear. After which, what more could one want than to curl up The sequel picks up where the bestselling first volume with a good book and then nap. left off. Showcasing everything Brown fans (and they are legion) have ever wanted to know about For more information, visit Cancer Therapy and his award-winning television show, The Middle Years Treatment Center’s Web site at ctrc.net. 118 On The Town | September-October 2010 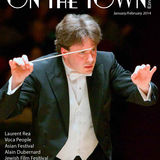 OnTheTownEzine.com is an electronic magazine highlighting performing, visual and culinary arts, plus information on festivals and celebratio...

OnTheTownEzine.com is an electronic magazine highlighting performing, visual and culinary arts, plus information on festivals and celebratio...