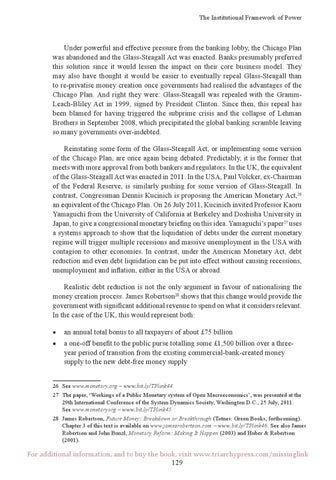 The Institutional Framework of Power

Under powerful and effective pressure from the banking lobby, the Chicago Plan was abandoned and the Glass-Steagall Act was enacted. Banks presumably preferred this solution since it would lessen the impact on their core business model. They may also have thought it would be easier to eventually repeal Glass-Steagall than to re-privatise money creation once governments had realised the advantages of the Chicago Plan. And right they were: Glass-Steagall was repealed with the GrammLeach-Bliley Act in 1999, signed by President Clinton. Since then, this repeal has been blamed for having triggered the subprime crisis and the collapse of Lehman Brothers in September 2008, which precipitated the global banking scramble leaving so many governments over-indebted. Reinstating some form of the Glass-Steagall Act, or implementing some version of the Chicago Plan, are once again being debated. Predictably, it is the former that meets with more approval from both bankers and regulators. In the UK, the equivalent of the Glass-Steagall Act was enacted in 2011. In the USA, Paul Volcker, ex-Chairman of the Federal Reserve, is similarly pushing for some version of Glass-Steagall. In contrast, Congressman Dennis Kucinich is proposing the American Monetary Act,26 an equivalent of the Chicago Plan. On 26 July 2011, Kucinich invited Professor Kaoru Yamaguchi from the University of California at Berkeley and Doshisha University in Japan, to give a congressional monetary briefing on this idea. Yamaguchi’s paper27 uses a systems approach to show that the liquidation of debts under the current monetary regime will trigger multiple recessions and massive unemployment in the USA with contagion to other economies. In contrast, under the American Monetary Act, debt reduction and even debt liquidation can be put into effect without causing recessions, unemployment and inflation, either in the USA or abroad. Realistic debt reduction is not the only argument in favour of nationalising the money creation process. James Robertson28 shows that this change would provide the government with significant additional revenue to spend on what it considers relevant. In the case of the UK, this would represent both: • an annual total bonus to all taxpayers of about £75 billion • a one-off benefit to the public purse totalling some £1,500 billion over a threeyear period of transition from the existing commercial-bank-created money supply to the new debt-free money supply 26 See www.monetary.org ~ www.bit.ly/TPlink44 27 The paper, ‘Workings of a Public Monetary system of Open Macroeconomics’, was presented at the 29th International Conference of the System Dynamics Society, Washington D.C., 25 July, 2011. See www.monetaryorg ~ www.bit.ly/TPlink45 28 James Robertson, Future Money: Breakdown or Breakthrough (Totnes: Green Books, forthcoming). Chapter 3 of this text is available on www.jamesrobertson.com ~ www.bit.ly/TPlink46. See also James Robertson and John Bunzl, Monetary Reform: Making It Happen (2003) and Huber & Robertson (2001).

For additional information, and to buy the book, visit www.triarchypress.com/missinglink 129 We tend to assume that we must have a single, monopolistic currency, funded through bank debt, enforced by a central bank. But we don’t need...

We tend to assume that we must have a single, monopolistic currency, funded through bank debt, enforced by a central bank. But we don’t need...