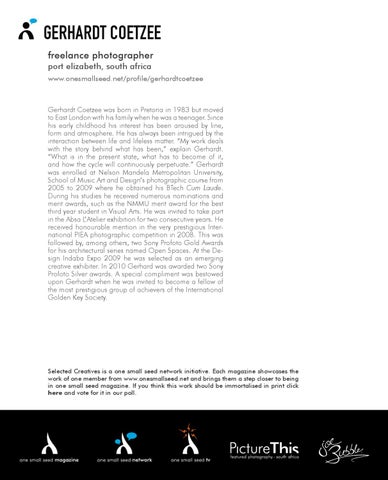 Gerhardt Coetzee was born in Pretoria in 1983 but moved to East London with his family when he was a teenager. Since his early childhood his interest has been aroused by line, form and atmosphere. He has always been intrigued by the interaction between life and lifeless matter. “My work deals with the story behind what has been,” explain Gerhardt. “What is in the present state, what has to become of it, and how the cycle will continuously perpetuate.” Gerhardt was enrolled at Nelson Mandela Metropolitan University, School of Music Art and Design’s photographic course from 2005 to 2009 where he obtained his BTech Cum Laude. During his studies he received numerous nominations and merit awards, such as the NMMU merit award for the best third year student in Visual Arts. He was invited to take part in the Absa L’Atelier exhibition for two consecutive years. He received honourable mention in the very prestigious International PIEA photographic competition in 2008. This was followed by, among others, two Sony Profoto Gold Awards for his architectural series named Open Spaces. At the Design Indaba Expo 2009 he was selected as an emerging creative exhibiter. In 2010 Gerhard was awarded two Sony Profoto Silver awards. A special compliment was bestowed upon Gerhardt when he was invited to become a fellow of the most prestigious group of achievers of the International Golden Key Society.

Selected Creatives is a one small seed network initiative. Each magazine showcases the work of one member from www.onesmallseed.net and brings them a step closer to being in one small seed magazine. If you think this work should be immortalised in print click here and vote for it in our poll.