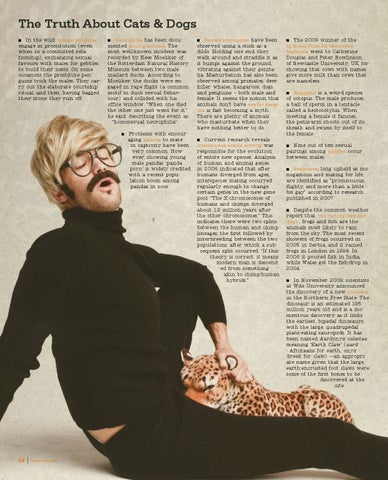 The Truth About Cats &amp; Dogs   In the wild, female penguins engage in prostitution (even when in a committed relationship), exchanging sexual favours with males for pebbles to build their nests. On some occasions the prostitute penguins trick the males. They carry out the elaborate courtship ritual, and then, having bagged their stone, they run off.

Ig Nobel Prize for Veterinary Medicine went to Catherine Douglas and Peter Rowlinson of Newcastle University, UK for showing that cows with names give more milk than cows that are nameless.   Argonaut is a weird species of octopus. The male produces a ball of sperm in a tentacle called a hectocotylus. When meeting a female it fancies, the penis-arm shoots out of its sheath and swims by itself to the female.

interspecies sexual activity was responsible for the evolution of entire new species. Analysis of human and animal genes in 2006 indicated that after humans diverged from apes, interspecies mating occurred regularly enough to change certain genes in the new gene pool: “The X-chromosomes of humans and chimps diverged about 1.2 million years after the other chromosomes.” This indicates there were two splits between the human and chimp lineages; the first followed by interbreeding between the two populations, after which a subsequent split occurred. “If this theory is correct, it means modern man is descended from something akin to chimp-human hybrids.”

Nine out of ten sexual pairings among giraffes occur between males.   Seahorses, long upheld as monogamous and mating for life, are identified as “promiscuous, flighty, and more than a little bit gay” according to research published in 2007.   Despite the common weather report that ‘it’s raining cats and dogs’, frogs and fish are the animals most likely to rain from the sky. The most recent showers of frogs occurred in 2005 in Serbia, and it rained frogs in London in 1998. In 2006 it poured fish in India, while Wales got the fish-drop in 2004.   In November 2009, scientists at Wits University announced the discovery of a new dinosaur in the Northern Free State. The dinosaur is an estimated 195 million years old and is a momentous discovery as it links the earliest, bipedal dinosaurs with the large, quadrupedal plant-eating sauropods. It has been named Aardonyx celestae, meaning ‘Earth Claw’ (aard - Afrikaans for earth; onyx Greek for claw) – an appropriate name given that the large, earth-encrusted foot claws were some of the first bones to be discovered at the site. 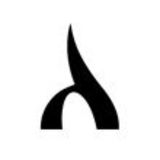