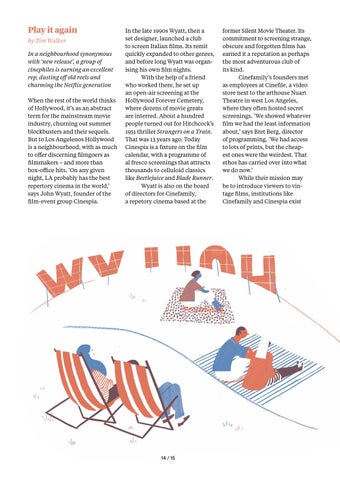 Play it again by Tim Walker In a neighbourhood synonymous with ‘new release’, a group of cinephiles is earning an excellent rep, dusting off old reels and charming the Netflix generation When the rest of the world thinks of Hollywood, it’s as an abstract term for the mainstream movie industry, churning out summer blockbusters and their sequels. But to Los Angelenos Hollywood is a neighbourhood, with as much to offer discerning filmgoers as filmmakers – and more than box-office hits. ‘On any given night, LA probably has the best repertory cinema in the world,’ says John Wyatt, founder of the film-event group Cinespia.

In the late 1990s Wyatt, then a set designer, launched a club to screen Italian films. Its remit quickly expanded to other genres, and before long Wyatt was organising his own film nights. With the help of a friend who worked there, he set up an open-air screening at the Hollywood Forever Cemetery, where dozens of movie greats are interred. About a hundred people turned out for Hitchcock’s 1951 thriller Strangers on a Train. That was 13 years ago. Today Cinespia is a fixture on the film calendar, with a programme of al fresco screenings that attracts thousands to celluloid classics like Beetlejuice and Blade Runner. Wyatt is also on the board of directors for Cinefamily, a repetory cinema based at the

former Silent Movie Theater. Its commitment to screening strange, obscure and forgotten films has earned it a reputation as perhaps the most adventurous club of its kind. Cinefamily’s founders met as employees at Cinefile, a video store next to the arthouse Nuart Theatre in west Los Angeles, where they often hosted secret screenings. ‘We showed whatever film we had the least information about,’ says Bret Berg, director of programming. ‘We had access to lots of prints, but the cheapest ones were the weirdest. That ethos has carried over into what we do now.’ While their mission may be to introduce viewers to vintage films, institutions like Cinefamily and Cinespia exist