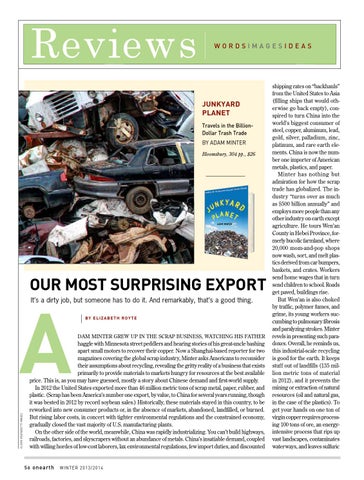 our most surprising export

It’s a dirty job, but someone has to do it. And remarkably, that’s a good thing. by elizabeth royte

dam Minter grew up in the scrap business, watching his father

haggle with Minnesota street peddlers and hearing stories of his great-uncle bashing apart small motors to recover their copper. Now a Shanghai-based reporter for two magazines covering the global scrap industry, Minter asks Americans to reconsider their assumptions about recycling, revealing the gritty reality of a business that exists primarily to provide materials to markets hungry for resources at the best available price. This is, as you may have guessed, mostly a story about Chinese demand and first-world supply. In 2012 the United States exported more than 46 million metric tons of scrap metal, paper, rubber, and plastic. (Scrap has been America’s number one export, by value, to China for several years running, though it was bested in 2012 by record soybean sales.) Historically, these materials stayed in this country, to be reworked into new consumer products or, in the absence of markets, abandoned, landfilled, or burned. But rising labor costs, in concert with tighter environmental regulations and the constrained economy, gradually closed the vast majority of U.S. manufacturing plants. On the other side of the world, meanwhile, China was rapidly industrializing. You can’t build highways, railroads, factories, and skyscrapers without an abundance of metals. China’s insatiable demand, coupled with willing hordes of low-cost laborers, lax environmental regulations, few import duties, and discounted

shipping rates on “backhauls” from the United States to Asia (filling ships that would otherwise go back empty), conspired to turn China into the world’s biggest consumer of steel, copper, aluminum, lead, gold, silver, palladium, zinc, platinum, and rare earth elements. China is now the number one importer of American metals, plastics, and paper. Minter has nothing but admiration for how the scrap trade has globalized. The industry “turns over as much as $500 billion annually” and employs more people than any other industry on earth except agriculture. He tours Wen’an County in Hebei Province, formerly bucolic farmland, where 20,000 mom-and-pop shops now wash, sort, and melt plastics derived from car bumpers, baskets, and crates. Workers send home wages that in turn send children to school. Roads get paved, buildings rise. But Wen’an is also choked by traffic, polymer fumes, and grime, its young workers succumbing to pulmonary fibrosis and paralyzing strokes. Minter revels in presenting such paradoxes. Overall, he reminds us, this industrial-scale recycling is good for the earth. It keeps stuff out of landfills (135 million metric tons of material in 2012), and it prevents the mining or extraction of natural resources (oil and natural gas, in the case of the plastics). To get your hands on one ton of virgin copper requires processing 100 tons of ore, an energyintensive process that rips up vast landscapes, contaminates waterways, and leaves sulfuric 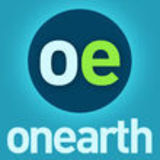