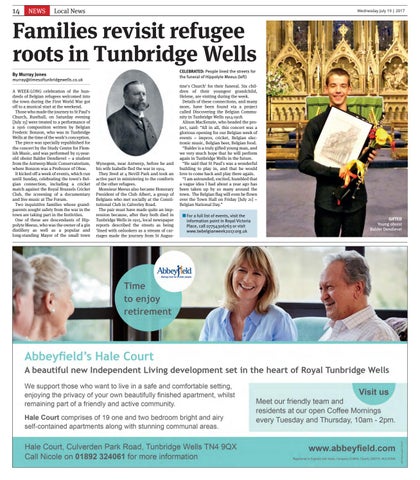 murray@timesoftunbridgewells.co.uk A WEEK-LONG celebration of the hundreds of Belgian refugees welcomed into the town during the First World War got off to a musical start at the weekend. Those who made the journey to St Paul’s Church, Rusthall, on Saturday evening [July 15] were treated to a performance of a 1916 composition written by Belgian Frederic Bonzon, who was in Tunbridge Wells at the time of the work’s conception. The piece was specially republished for the concert by the Study Centre for Flemish Music, and was performed by 15-yearold oboist Balder Dendievel – a student from the Antwerp Music Conservatorium, where Bonzon was a Professor of Oboe. It kicked off a week of events, which run until Sunday, celebrating the town’s Belgian connection, including a cricket match against the Royal Brussels Cricket Club, the screening of a documentary and live music at The Forum. Two inquisitive families whose grandparents sought safety from the war in the town are taking part in the festivities. One of these are descendants of Hippolyte Meeus, who was the owner of a gin distillery as well as a popular and long-standing Mayor of the small town

Wynegem, near Antwerp, before he and his wife Isabelle fled the war in 1914. They lived at 4 Nevill Park and took an active part in ministering to the comforts of the other refugees. Monsieur Meeus also became Honorary President of the Club Albert, a group of Belgians who met socially at the Constitutional Club in Calverley Road. The pair must have made quite an impression because, after they both died in Tunbridge Wells in 1915, local newspaper reports described the streets as being ‘lined with onlookers as a stream of carriages made the journey from St Augus-

tine’s Church’ for their funeral. Six children of their youngest grandchild, Helene, are visiting during the week. Details of these connections, and many more, have been found via a project called Discovering the Belgian Community in Tunbridge Wells 1914-1918. Alison MacKenzie, who headed the project, said: “All in all, this concert was a glorious opening for our Belgian week of events – improv, cricket, Belgian electronic music, Belgian beer, Belgian food. “Balder is a truly gifted young man, and we very much hope that he will perform again in Tunbridge Wells in the future. “He said that St Paul’s was a wonderful building to play in, and that he would love to come back and play there again. “I am astounded, excited, humbled that a vague idea I had about a year ago has been taken up by so many around the town. The Belgian flag will even be flown over the Town Hall on Friday [July 21] – Belgian National Day.” n For a full list of events, visit the