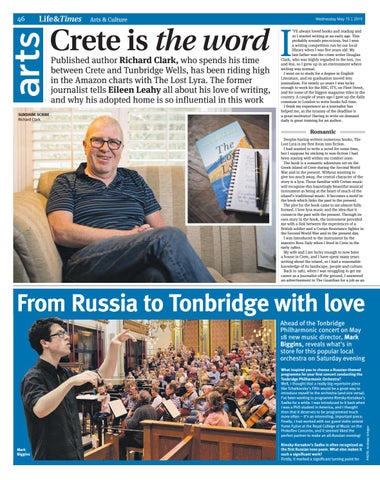 Crete is the word

Published author Richard Clark, who spends his time between Crete and Tunbridge Wells, has been riding high in the Amazon charts with The Lost Lyra. The former journalist tells Eileen Leahy all about his love of writing, and why his adopted home is so influential in this work

’VE always loved books and reading and so I started writing at an early age. This probably sounds precocious, but I won a writing competition run by our local library when I was five years old. My late father was the crime writer Douglas Clark, who was highly regarded in the 60s, 70s and 80s, so I grew up in an environment where writing was normal. I went on to study for a degree in English Literature, and on graduation moved into journalism. For nearly 40 years I was lucky enough to work for the BBC, ITV, on Fleet Street, and for some of the biggest magazine titles in the country. A couple of years ago I gave up the daily commute to London to write books full time. I think my experience as a journalist has helped me, as the tyranny of the deadline is a great motivator! Having to write on demand daily is great training for an author.

Romantic Despite having written numerous books, The Lost Lyra is my first foray into fiction. I had wanted to write a novel for some time, but I suppose by sticking to non-fiction I had been staying well within my comfort zone. The book is a romantic adventure set on the Greek island of Crete during the Second World War and in the present. Without wanting to give too much away, the central character of the story is a lyra. Those familiar with Cretan music will recognise this hauntingly beautiful musical instrument as being at the heart of much of the island’s traditional music. It becomes a motif in the book which links the past to the present. The plot for the book came to me almost fully formed. I love lyra music and the idea that it connects the past with the present. Through its own story in the book, the instrument provided me with a link between the experiences of a British soldier and a Cretan Resistance fighter in the Second World War and in the present day. I was introduced to the instrument by the maestro Ross Daly when I lived in Crete in the early 1980s. My wife and I are lucky enough to now have a house in Crete, and I have spent many years writing about the island, so I had a reasonable knowledge of its landscape, people and culture. Back in 1982, when I was struggling to get my career as a journalist off the ground, I answered an advertisement in The Guardian for a job as an

From Russia to Tonbridge with love What inspired you to choose a Russian-themed programme for your first concert conducting the Tonbridge Philharmonic Orchestra? Well, I thought that a really big repertoire piece like Tchaikovsky’s Fifth would be a great way to introduce myself to the orchestra (and vice versa). I’ve been wanting to programme Rimsky-Korsakov’s Sadko for a while. I was introduced to it back when I was a PhD student in America, and I thought then that it deserves to be programmed much more often – it’s an interesting, important piece. Finally, I had worked with our guest violin soloist Yume Fujise at the Royal College of Music on the Prokofiev Concerto, and it seemed liked the perfect partner to make an all-Russian evening! Mark Biggins

Rimsky-Korsakov’s Sadko is often recognised as the first Russian tone poem. What else makes it such a significant work? Firstly, it marked a significant turning point for

Ahead of the Tonbridge Philharmonic concert on May 18 new music director, Mark Biggins, reveals what’s in store for this popular local orchestra on Saturday evening