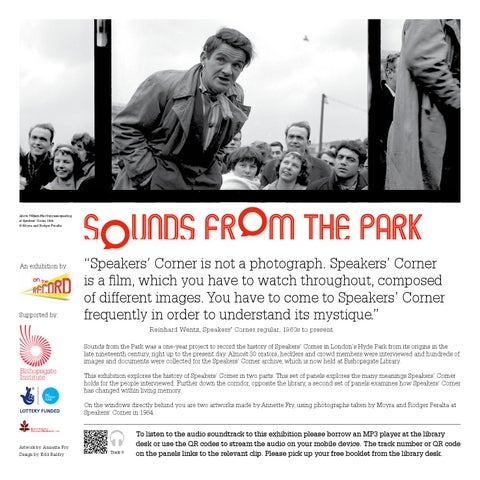 To listen to the audio soundtrack to this exhibition please borrow an MP3 player at the library desk or use the QR codes to stream the audio on your mobile device. The track number or QR code on the panels links to the relevant clip. Please pick up your free booklet from the library desk.

“I like to think it is unique. The fact that you go down there and you’re not sure what’s going to happen. It’s just unplanned. Suddenly, something will take off. You’ll hear a voice on the other side of the corner and you’d see a crowd surging in one direction and that would really give me a buzz.” Chris Kennett, Speakers’ Corner regular and documenter, 1960s to present

“I don’t do heckling for the sake of heckling, I’m just interested in what people are saying and I want to bring things out. If they are saying something that doesn’t seem right I will say so.” Ruth Eastwood, heckler and debater, 1940s to present

“At the moment things are quiet, maybe things will change in a while. My own personal relationship to Speakers’ Corner is more didactic than revolutionary at the moment, because if I spit fire and brimstone I just look like I’m pissin’ in the wind. And I prefer not to look like that.” Heiko Khoo, Marxist speaker, 1980s to present day

“Probably it’s a form of anger management. It gets rid of my own spleen. It allows me to a) get an audience, b) be funny, and c) get rid of that anger that I feel.” Tom Tickell, heckler, speaker and diarist, 1960s to present

“We were very young and inexperienced and I was on the platform. We took turns. We were all novices, we were struggling through. Trying to make people aware that homosexuality is something like being left-handed, putting it into the real world. This elderly man was pulling my coat and he said, ‘Thank you for being here’. That is something I remember because it was prophetic in a way. It was a very elderly man so, to think what they may have had to go through. That was an encouragement to carry on because it was quite easy to give up.” Sharley McLean, regular, heckler and speaker (from 1980s) on the “Hyde Park Gays and Sapphics” platform, 1939 to present

“I’d performed as a street entertainer around Speakers’ Corner but the ultimate performance thing was to actually speak there. Then, I was still working out my relationship with the fourth wall and the audience. I never understood the difference between acting and performing. Nowadays that’s what I teach, the difference between the two and how you’re not in a character, as a performer, you’re a version of yourself and you’re talking directly to the audience.” Tony Allen, anarchist speaker, comedian and advocate heckler, 1970s to present

“It was part of my development but that development took me to other places … Paul, Saint Paul [pictured above], one of his favourite quotes was apparently a Sufi quote: a man who’s walking in a forest sees a strange looking stone. So he picks it up and sees there’s writing on the bottom which says, ‘Why do you seek more knowledge when you don’t put into practice what you already know?’ And sometimes Paul would just say that and shut up and everyone would sort of, ‘Mm, okay’. In a way that was why I moved on.” Myk Zeitlin, Speakers’ Corner regular, 1970s

“Speakers’ Corner means different things to different people and that’s a very important thing to understand. I continue to go to Speakers’ Corner for the reason I first went there: because it’s there and it remains, so ‘use it or lose it’ is relevant. A good day usually means that I’ve spoken to a fair number of people, the more diverse the background the more interesting.” Bob Rogers, Speakers’ Corner regular, wears sign “It’s Going to Get Worse”, 1960s to present.

The exhibition continues outside the library entrance.

Discover eight intriguing individuals who have spoken, heckled or taken part in Speakers' Corner over the years.