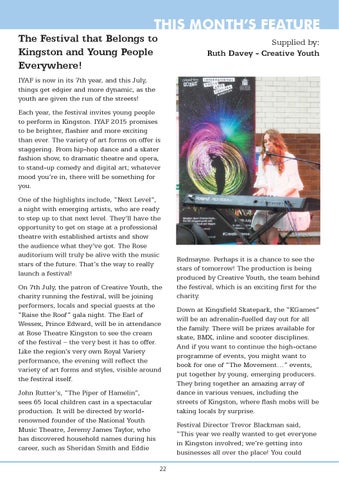 The Festival that Belongs to Kingston and Young People Everywhere!

IYAF is now in its 7th year, and this July, things get edgier and more dynamic, as the youth are given the run of the streets! Each year, the festival invites young people to perform in Kingston. IYAF 2015 promises to be brighter, flashier and more exciting than ever. The variety of art forms on offer is staggering. From hip-hop dance and a skater fashion show, to dramatic theatre and opera, to stand-up comedy and digital art; whatever mood you’re in, there will be something for you. One of the highlights include, “Next Level”, a night with emerging artists, who are ready to step up to that next level. They’ll have the opportunity to get on stage at a professional theatre with established artists and show the audience what they’ve got. The Rose auditorium will truly be alive with the music stars of the future. That’s the way to really launch a festival! On 7th July, the patron of Creative Youth, the charity running the festival, will be joining performers, locals and special guests at the “Raise the Roof” gala night. The Earl of Wessex, Prince Edward, will be in attendance at Rose Theatre Kingston to see the cream of the festival – the very best it has to offer. Like the region’s very own Royal Variety performance, the evening will reflect the variety of art forms and styles, visible around the festival itself. John Rutter’s, “The Piper of Hamelin”, sees 65 local children cast in a spectacular production. It will be directed by worldrenowned founder of the National Youth Music Theatre, Jeremy James Taylor, who has discovered household names during his career, such as Sheridan Smith and Eddie

Redmayne. Perhaps it is a chance to see the stars of tomorrow! The production is being produced by Creative Youth, the team behind the festival, which is an exciting first for the charity. Down at Kingsfield Skatepark, the “KGames” will be an adrenalin-fuelled day out for all the family. There will be prizes available for skate, BMX, inline and scooter disciplines. And if you want to continue the high-octane programme of events, you might want to book for one of “The Movement…” events, put together by young, emerging producers. They bring together an amazing array of dance in various venues, including the streets of Kingston, where flash mobs will be taking locals by surprise. Festival Director Trevor Blackman said, “This year we really wanted to get everyone in Kingston involved; we’re getting into businesses all over the place! You could 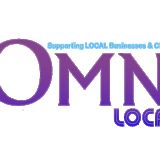 This is our 33rd issue of Omni Local! -The IYAF Special edition! All about the upcoming Kingston Festival, as well as local events and Fath...

This is our 33rd issue of Omni Local! -The IYAF Special edition! All about the upcoming Kingston Festival, as well as local events and Fath...