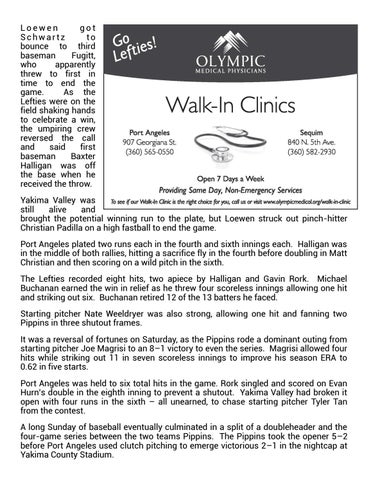 Loewen got Schwartz to bounce to third baseman Fugitt, who apparently threw to first in time to end the game. As the Lefties were on the field shaking hands to celebrate a win, the umpiring crew reversed the call and said first baseman Baxter Halligan was off the base when he received the throw. Yakima Valley was still alive and brought the potential winning run to the plate, but Loewen struck out pinch-hitter Christian Padilla on a high fastball to end the game. Port Angeles plated two runs each in the fourth and sixth innings each. Halligan was in the middle of both rallies, hitting a sacrifice fly in the fourth before doubling in Matt Christian and then scoring on a wild pitch in the sixth. The Lefties recorded eight hits, two apiece by Halligan and Gavin Rork. Michael Buchanan earned the win in relief as he threw four scoreless innings allowing one hit and striking out six. Buchanan retired 12 of the 13 batters he faced. Starting pitcher Nate Weeldryer was also strong, allowing one hit and fanning two Pippins in three shutout frames.

It was a reversal of fortunes on Saturday, as the Pippins rode a dominant outing from starting pitcher Joe Magrisi to an 8–1 victory to even the series. Magrisi allowed four hits while striking out 11 in seven scoreless innings to improve his season ERA to 0.62 in five starts. Port Angeles was held to six total hits in the game. Rork singled and scored on Evan Hurn’s double in the eighth inning to prevent a shutout. Yakima Valley had broken it open with four runs in the sixth – all unearned, to chase starting pitcher Tyler Tan from the contest. A long Sunday of baseball eventually culminated in a split of a doubleheader and the four-game series between the two teams Pippins. The Pippins took the opener 5–2 before Port Angeles used clutch pitching to emerge victorious 2–1 in the nightcap at Yakima County Stadium.