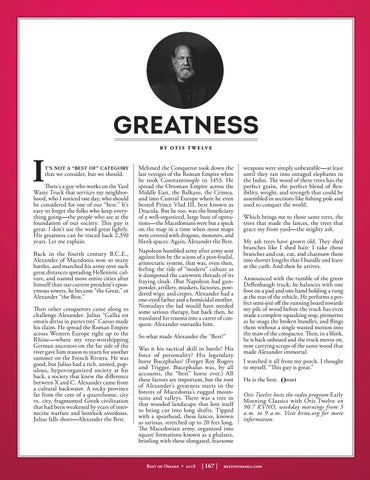 T’S NOT A “BEST OF” CATEGORY

that we consider, but we should.

There’s a guy who works on the Yard Waste Truck that services my neighborhood, who I noticed one day, who should be considered for one of our “best.” It’s easy to forget the folks who keep everything going—the people who are at the foundation of our society. This guy is great. I don’t use the word great lightly. His greatness can be traced back 2,350 years. Let me explain. Back in the fourth century B.C.E., Alexander of Macedonia won so many battles, and marched his army over such great distances spreading Hellenistic culture, and named more entire cities after himself than our current president’s eponymous towers, he became “the Great,” or Alexander “the Best.” Then other conquerors came along to challenge Alexander. Julius “Gallia est omnis divisa in partes tres” Caesar made his claim. He spread the Roman Empire across Western Europe right up to the Rhine—where my tree-worshipping German ancestors on the far side of the river gave him reason to yearn for another summer on the French Riviera. He was good, but Julius had a rich, united, populous, hyper-organized society at his back, a society that knew the difference between X and C. Alexander came from a cultural backwater. A rocky province far from the core of a quarrelsome, city vs. city, fragmented Greek civilization that had been weakened by years of internecine warfare and hemlock overdoses. Julius falls short—Alexander the Best.

Mehmed the Conqueror took down the last vestiges of the Roman Empire when he took Constantinople in 1453. He spread the Ottoman Empire across the Middle East, the Balkans, the Crimea, and into Central Europe where he even bested Prince Vlad III, best known as Dracula. But he too, was the beneficiary of a well-organized, large base of operations—the Macedonians were but a speck on the map in a time when most maps were covered with dragons, monsters, and blank spaces. Again, Alexander the Best. Napoleon humbled army after army sent against him by the scions of a post-feudal, aristocratic system, that was, even then, feeling the tide of “modern” culture as it dampened the careworn threads of its fraying cloak. (But Napoleon had gunpowder, artillery, muskets, factories, powdered wigs, and crepes. Alexander had a one-eyed father and a homicidal mother. Nowadays the lad would have needed some serious therapy, but back then, he translated his trauma into a career of conquest. Alexander outranks him. So what made Alexander the “Best?” Was it his tactical skill in battle? His force of personality? His legendary horse Bucephalus? (Forget Roy Rogers and Trigger. Bucephalus was, by all accounts, the “best” horse ever.) All these factors are important, but the root of Alexander’s greatness starts in the forests of Macedonia’s rugged mountains and valleys. There was a tree in that wooded landscape that lent itself to being cut into long shafts. Tipped with a spearhead, these lances, known as sarissas, stretched up to 20 feet long. The Macedonian army, organized into square formations known as a phalanx, bristling with these elongated, fearsome

weapons were simply unbeatable—at least until they ran into enraged elephants in the Indus. The wood of these trees has the perfect grain, the perfect blend of flexibility, weight, and strength that could be assembled in sections like fishing pole and used to conquer the world. Which brings me to those same trees, the trees that made the lances, the trees that grace my front yard—the mighty ash. My ash trees have grown old. They shed branches like I shed hair. I take those branches and cut, cut, and chainsaw them into shorter lengths that I bundle and leave at the curb. And then he arrives. Announced with the rumble of the green Deffenbaugh truck, he balances with one foot on a pad and one hand holding a rung at the rear of the vehicle. He performs a perfect semi-jeté off the running board towards my pile of wood before the truck has even made a complete squeaking stop, pirouettes as he snags the broken bundles, and flings them without a single wasted motion into the maw of the compactor. Then, in a blink, he is back onboard and the truck moves on, now carrying scraps of the same wood that made Alexander immortal. I watched it all from my porch. I thought to myself, “This guy is great.” He is the best.  Otis Twelve hosts the radio program Early Morning Classics with Otis Twelve on 90.7 KVNO, weekday mornings from 5 a.m. to 9 a.m. Visit kvno.org for more information. 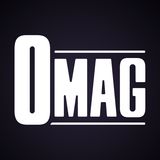