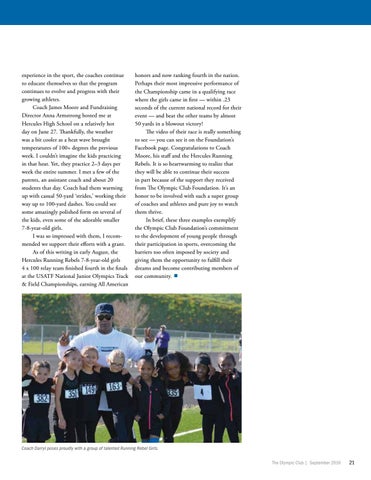 experience in the sport, the coaches continue to educate themselves so that the program continues to evolve and progress with their growing athletes. Coach James Moore and Fundraising Director Anna Armstrong hosted me at Hercules High School on a relatively hot day on June 27. Thankfully, the weather was a bit cooler as a heat wave brought temperatures of 100+ degrees the previous week. I couldn’t imagine the kids practicing in that heat. Yet, they practice 2–3 days per week the entire summer. I met a few of the parents, an assistant coach and about 20 students that day. Coach had them warming up with casual 50-yard ‘strides,’ working their way up to 100-yard dashes. You could see some amazingly polished form on several of the kids, even some of the adorable smaller 7-8-year-old girls. I was so impressed with them, I recommended we support their efforts with a grant. As of this writing in early August, the Hercules Running Rebels 7-8-year-old girls 4 x 100 relay team finished fourth in the finals at the USATF National Junior Olympics Track & Field Championships, earning All American

honors and now ranking fourth in the nation. Perhaps their most impressive performance of the Championship came in a qualifying race where the girls came in first — within .23 seconds of the current national record for their event — and beat the other teams by almost 50 yards in a blowout victory! The video of their race is really something to see — you can see it on the Foundation’s Facebook page. Congratulations to Coach Moore, his staff and the Hercules Running Rebels. It is so heartwarming to realize that they will be able to continue their success in part because of the support they received from The Olympic Club Foundation. It’s an honor to be involved with such a super group of coaches and athletes and pure joy to watch them thrive. In brief, these three examples exemplify the Olympic Club Foundation’s commitment to the development of young people through their participation in sports, overcoming the barriers too often imposed by society and giving them the opportunity to fulfill their dreams and become contributing members of our community.  This month we celebrate the women’s soccer team’s third straight national championship title by examining the culture of excellence they’ve...

This month we celebrate the women’s soccer team’s third straight national championship title by examining the culture of excellence they’ve...