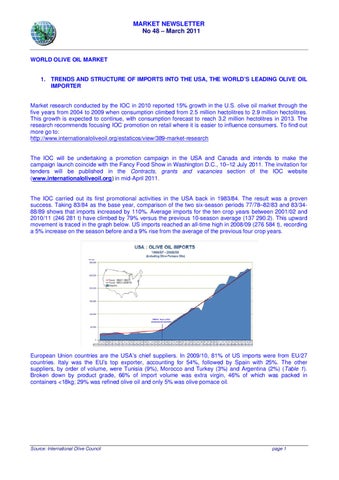 1. TRENDS AND STRUCTURE OF IMPORTS INTO THE USA, THE WORLD’S LEADING OLIVE OIL IMPORTER

Market research conducted by the IOC in 2010 reported 15% growth in the U.S. olive oil market through the five years from 2004 to 2009 when consumption climbed from 2.5 million hectolitres to 2.9 million hectolitres. This growth is expected to continue, with consumption forecast to reach 3.2 million hectolitres in 2013. The research recommends focusing IOC promotion on retail where it is easier to influence consumers. To find out more go to: http://www.internationaloliveoil.org/estaticos/view/389-market-research

The IOC will be undertaking a promotion campaign in the USA and Canada and intends to make the campaign launch coincide with the Fancy Food Show in Washington D.C., 10–12 July 2011. The invitation for tenders will be published in the Contracts, grants and vacancies section of the IOC website (www.internationaloliveoil.org) in mid-April 2011. 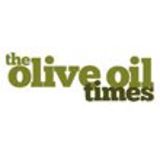