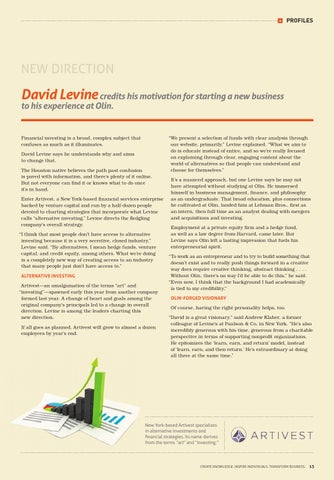 David Levine credits his motivation for starting a new business to his experience at Olin.

Financial investing is a broad, complex subject that confuses as much as it illuminates. David Levine says he understands why and aims to change that. The Houston native believes the path past confusion is paved with information, and there’s plenty of it online. But not everyone can find it or knows what to do once it’s in hand. Enter Artivest, a New York-based financial services enterprise backed by venture capital and run by a half-dozen people devoted to charting strategies that incorporate what Levine calls “alternative investing.” Levine directs the fledgling company’s overall strategy. “I think that most people don’t have access to alternative investing because it is a very secretive, closed industry,” Levine said. “By alternatives, I mean hedge funds, venture capital, and credit equity, among others. What we’re doing is a completely new way of creating access to an industry that many people just don’t have access to.” ALTERNATIVE INVESTING Artivest—an amalgamation of the terms “art” and “investing”—spawned early this year from another company formed last year. A change of heart and goals among the original company’s principals led to a change in overall direction. Levine is among the leaders charting this new direction. If all goes as planned, Artivest will grow to almost a dozen employees by year’s end.

“We present a selection of funds with clear analysis through our website, primarily,” Levine explained. “What we aim to do is educate instead of entice, and so we’re really focused on explaining through clear, engaging content about the world of alternatives so that people can understand and choose for themselves.” It’s a nuanced approach, but one Levine says he may not have attempted without studying at Olin. He immersed himself in business management, finance, and philosophy as an undergraduate. That broad education, plus connections he cultivated at Olin, landed him at Lehman Bros., first as an intern, then full time as an analyst dealing with mergers and acquisitions and investing. Employment at a private equity firm and a hedge fund, as well as a law degree from Harvard, came later. But Levine says Olin left a lasting impression that fuels his entrepreneurial spirit. “To work as an entrepreneur and to try to build something that doesn’t exist and to really push things forward in a creative way does require creative thinking, abstract thinking . . . . Without Olin, there’s no way I’d be able to do this,” he said. “Even now, I think that the background I had academically is tied to my credibility.” OLIN-FORGED VISIONARY Of course, having the right personality helps, too. “David is a great visionary,” said Andrew Klaber, a former colleague of Levine’s at Paulson &amp; Co. in New York. “He’s also incredibly generous with his time, generous from a charitable perspective in terms of supporting nonprofit organizations. He epitomizes the ‘learn, earn, and return’ model, instead of ‘learn, earn, and then return.’ He’s extraordinary at doing all three at the same time.”

New York-based Artivest specializes in alternative investments and financial strategies. Its name derives from the terms “art” and “investing.” 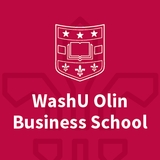