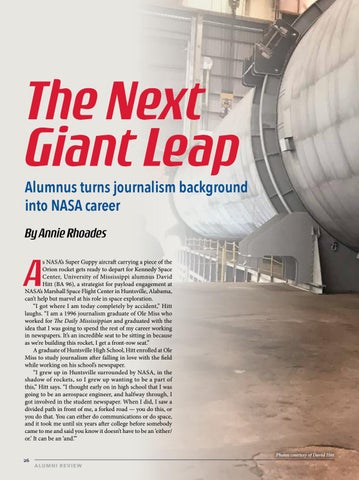 The Next Giant Leap

s NASA’s Super Guppy aircraft carrying a piece of the Orion rocket gets ready to depart for Kennedy Space Center, University of Mississippi alumnus David Hitt (BA 96), a strategist for payload engagement at NASA’s Marshall Space Flight Center in Huntsville, Alabama, can’t help but marvel at his role in space exploration. “I got where I am today completely by accident,” Hitt laughs. “I am a 1996 journalism graduate of Ole Miss who worked for The Daily Mississippian and graduated with the idea that I was going to spend the rest of my career working in newspapers. It’s an incredible seat to be sitting in because as we’re building this rocket, I get a front-row seat.” A graduate of Huntsville High School, Hitt enrolled at Ole Miss to study journalism after falling in love with the field while working on his school’s newspaper. “I grew up in Huntsville surrounded by NASA, in the shadow of rockets, so I grew up wanting to be a part of this,” Hitt says. “I thought early on in high school that I was going to be an aerospace engineer, and halfway through, I got involved in the student newspaper. When I did, I saw a divided path in front of me, a forked road — you do this, or you do that. You can either do communications or do space, and it took me until six years after college before somebody came to me and said you know it doesn’t have to be an ‘either/ or.’ It can be an ‘and.’” 26 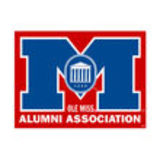