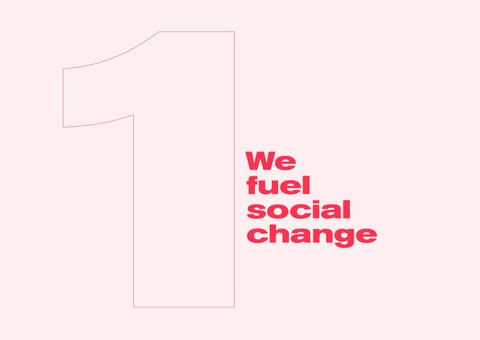 WE FUEL SOCIAL CHANGE We believe in theatre’s ability to provoke, to interrogate perceived thought and to demonstrate how the roots of political, social and personal change are fuelled by a nation’s culture. Becoming empathetic and socially aware is a crucial step in empowering people to make positive change. The key to theatre’s unique ability to create empathy and challenge the status quo lies in the power of storytelling. To have genuine impact, work of this nature cannot be limited to isolated examples.

Impacts The world-class creative power and scale of productions possible at The Old Vic provides a unique opportunity to address, through a body of work, the contemporary challenges faced by today’s audiences. We harness the size and iconoclastic reputation of The Old Vic to engage audiences of 1,000 people a night with challenging and socially-relevant work, programmed with high production values.

‘Fiction doesn’t have to be just a diversion or a pastime. It really can change individuals and societies for the better. Intelligent entertainment is a transformative necessity, not a luxury’ Matthew Warchus, Artistic Director

OUR ACHIEVEMENTS 2015 TO DATE 1. Operating a leading creative producing house as a charitable endeavour, raising funds from corporate supporters, like our Principal Partner Royal Bank of Canada, and philanthropists to provide this work to the public, with no regular public subsidy from the Arts Council, employing circa 250 people and welcoming 300,000 visitors and community participants each year. In recent years our productions have received numerous award nominations and gone on to win, amongst others, Tony, Olivier, Evening Standard and Critics’ Circle awards 2. Commissioning and programming a consistent thread of adventurous and socially-powerful productions in Matthew Warchus’ first five Seasons, supported by Principal Partner Royal Bank of Canada and The Public Fund – a £1m fund raised from visionary philanthropists to programme work that is challenging or socially-relevant in some way. See case study 3. Devising a new series of events, Voices Off, that enable audience members to engage with our productions in more depth, provoking debate and expanded thinking by elevating themes and concepts from the productions. Since 2015, 53 Voices Off events have been made available for under £10 or for free and attended by just under 10,000 people WOYZECK. PHOTO: MANUEL HARLAN

4. Innovating a series of topical monologues, One Voice, curated by writers and actors and focusing on key anniversaries or moments of note. Nine One Voice evenings have been programmed since 2015, delivering 43 new monologues across the series to 5,500 people, 39% of whom were first time attendees to The Old Vic 5. Working with grassroots and community-integrated organisations, such as Theatre Peckham, to cast inclusively

‘Looking at The Old Vic, not only because of its past but what Matthew is doing with it now and in the future, that idea of attracting people who would not automatically think of going to the theatre, shows a vital energy resource. Because there isn’t going to be any theatre in the future if we don’t create the desire to go’ Glenda Jackson CBE, Actor and Old Vic Trustee

FUTURE COMMITMENTS TO 2023 1. Commission and programme at least two new challenging and socially-relevant works per year 2. Grow the additional programming of the theatre through One Voice and Voices Off, continuing to provoke debate and make the themes of the production more accessible 3. By 2023, welcome 25,000 more people to The Old Vic to experience more intimate theatre, more frequent panel debates, pop-up bar comedy, music and social experiences by developing a new Annex to the theatre that continues our commitment to audiences and emerging practitioners through the creation of a flexible low-fi studio theatre space

‘The connection with The Old Vic balances my life, expands my creativity and gives me a more complex and rich perspective of the world’ Ines Varela-Silva, Supporter CHRISTMAS STORYTELLING. PHOTO: ALEX RUMSFORD

‘There’s something about The Old Vic that takes you back to childhood excitement and wonder of the theatre’ Kate O’Shaughnessy, Supporter

Charlie Fink and David Greig’s musical adaptation of the much-loved story, Dr. Seuss’s THE LORAX, encouraging all to recognise our impact on the environment and our collective responsibility to protect the world – world premiere

WOYZECK by Georg Büchner, in a newly commissioned adaptation by Jack Thorne, a searing interpretation for our times of the archetypal working-class tragic hero – world premiere

THE MISSING LIGHT, by MAKE MEND and DO an enchanting family show about loneliness and isolation told through puppetry and live animation – world premiere

Charles Dickens’ A CHRISTMAS CAROL, in a newly commissioned adaptation by Jack Thorne based on a novella born out of rage, determination and fiery compassion for those in need, an iconic example of the humanitarian and political power of culture – world premiere

A MONSTER CALLS, a beautiful and haunting family show based on Patrick Ness’ novel from an original idea by Siobhan Dowd about a teenage boy coming to terms with guilt and grief around his mother’s illness – world premiere

SYLVIA, a hip-hop, funk and soul musical about the life of Sylvia Pankhurst commissioned to celebrate 100 years of British women’s suffrage – world premiere

THE AMERICAN CLOCK, Arthur Miller’s vaudevillian play centred around a family in the Great Depression, reimagined to embrace the multiculturalism of contemporary America and the impact of the economic boom and bust

A VERY EXPENSIVE POISON by Lucy Prebble adapted from Luke Harding’s exposé of the circumstances around the death of former Russian spy Alexander Litvinenko, a heart-breaking investigation into the power of international states – world premiere

Voices Off is a series of talks, conversations, debates and workshops given by leading figures in the arts, media, science and politics, which explore the themes raised by the productions on stage. Topics are wide-ranging, covering environment, politics and wellbeing. During A CHRISTMAS CAROL in 2018 we presented a panel debate on The Science of Generosity (why our evolution might influence the way we work together and how we give, with a panel including Dr Oliver Scott Curry, Director of the Oxford Morals Project, Giles Fraser, Guardian columnist and Church of England priest, and Dr Michael Muthukrishna, Assistant Professor of Economic Psychology at LSE and Harvard University). Also CHRISTMAS STORYTELLING with authors and performers reading short stories from their own work and from their childhood Christmas favourites (including Michael Rosen reading from Bah! Humbug!, his unforgettable new retelling of Dickens’ A CHRISTMAS CAROL) either independently or produced in collaboration with the BookTrust.

One Voice consists of a series of newlycommissioned monologues performed by renowned actors on The Old Vic stage marking a topic or anniversary that resonates with society. Subjects have included the 100th anniversary of the 1918 Representation of the People Act, the 70th birthday of the NHS, 100 years since the end of the First World War, and 50 years since the Sexual Offences Act in 1967. Creatives and actors either writing, performing and/or directing have included Zawe Ashton, Sheila Atim, Lolita Chakrabarti, Mark Gatiss, Adrian Lester, Maxine Peake, Russell Tovey and Julie Walters.

‘Within this format we provide a platform for voices old and new as they entertain, challenge and transport us through topics factual and fictional. Focusing on a solitary storyteller, in bitesized performances, we bear witness to the wisdom, folly, pain, confusion and heroism of the human spirit’ Matthew Warchus, Artistic Director ONE VOICE: REMEMBRANCE. PHOTO: MANUEL HARLAN 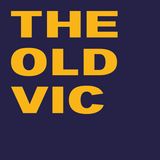