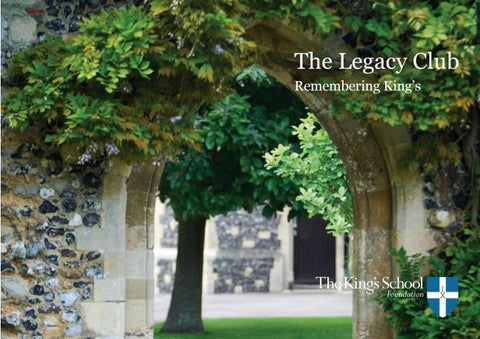 To get involved call 01227 595567 or mail foundation@kings-school.co.uk The King’s Foundation The King’s School 25 The Precints Canterbury Kent CT1 2ES

“The endowment of education is King’s enduring legacy. To maintain it we need your help.”

King’s Foundation It is one of the most moving aspects of my role as Headmaster at King’s to read the touching letters from OKS who want to remember their alma mater in their will. As always at King’s, the circumstances are individual. What threads through the narrative of these letters is not only a sense of gratitude for the range of opportunity a King’s education provided, but also the unique sense of belonging to one of the great schools and most historic of communities here at Canterbury.

Members of the Legacy Club are currently supporting new generations of talented pupils who do not have the financial resources to pay the full fees. This altruistic giving is an uplifting and transforming example to all of us.

Chairman of the Governors The Very Rev’d Dr Robert Willis, Dean of Canterbury

The very word Foundation sets fundraising in the place where it should be, providing an absolutely firm footing for the life of this ancient school with its life centred on Canterbury Cathedral.

On behalf of the Governors I thank you for your continued interest and huge support and my hope is that the Legacy Club will go from strength to strength in maintaining that strong Foundation.

Of course there will be wonderful projects which attract the attention of different donors and our gratitude to them is enormous but the essence of the Legacy Club is to provide a financial base which ensures confidence.

That confidence is about life here now, but also about our ability to hand on to the future a school which maintains its ancient ethos interpreted in an absolutely modern way for each age.

“King’s lacks the ‘financial endowment’ of many of its competitors.”

Reaching out and identifying those who deserve a King’s education

The King’s School, Canterbury has built a reputation as one of the world’s leading schools.

Often those who are precociously gifted do not have the financial resources to afford the opportunities King’s can offer. That is why the support from bursaries has for so long been so important. Within the current economic climate the need will grow. King’s is extraordinary. It delivers extraordinarily good teaching. Its pupils do extraordinary things, then go on to have extraordinary lives. All pupils at King’s are given the opportunity to develop their individual gifts. For some a King’s education will be a platform for success after they leave the Precincts. Others are more precocious. In such cases the School has an immediate responsibility to nurture them but needs your support to do so.

This reputation has been achieved in part because of the great generosity of past benefactors, like Robert Rose, sometime Lower Master, in the sixteenth century, or the Feast Society in the eighteenth and nineteenth centuries. If the tradition of a King’s world class education is to continue, we must increase dramatically the funds for deserving and gifted pupils.

“King’s with its music, drama and historic setting was an automatic choice. The School has given me a legacy which has benefited me all my life.” Jonathan Horsfall Turner Linacre 1959-64

Nurturing talent Many pupils need and deserve financial support. Your legacy will enable us to nurture the talents of many more.

One of King’s most noted virtuosi of recent years, Ed started in Junior King’s as a cellist and left the senior school to take up a prestigious organ scholarship at Hertford College, Oxford.

George left in summer 2014 with, like many King’s pupils, a hatful of GCSEs and A levels. Extraordinarily, George also left having registered a patent and having taken the manufacturing world by storm.

Now on track to become a conductor Ed won a scholarship to the Guildhall in London where he studied for a Master of Music in Répétiteurship working with some of the UK’s most talented opera singers.

His A Level engineering project – called Gas Sense – was highly commended in the Young Engineer for Britain competition and the School, recognising the value of the idea, suggested that George should apply for a patent. George says that the School, his Housemaster and the OKS network were invaluable, providing excellent counsel at every stage.

Few things better demonstrate King’s support for its scholars than the story of partiallysighted 15 year old Paralympian skier Millie Knight who returned to her study after competing in the Kent indoor rowing championships in January 2014 to a phone call telling her that she had been selected to compete in the Winter Olympics at Sochi.

Throughout his King’s career Ed received a significant bursary.

In November 2014 George was nominated to appear in a new list of the 100 most influential people in British manufacturing.

As well as supporting her education, King’s made sure Millie could train for 21 hours a week because that’s what it takes to be an Olympian and a Paralympic Flag Bearer. She thinks King’s was amazing. King’s thinks she’s rather special too. Millie went on to win two silver medals and one bronze at the 2018 Paralympics in Pyeongchang.

Capital project funding: our objectives Bequests from the past

Fundraising has played its part

The Security of Endowment

There is no doubt that throughout its long history King’s has had some significant major donations.

Financial support for capital projects is important to any school and King’s is no exception. In the absence of a large capital fund, the response of OKS, parents and friends to appeals has been not only extraordinarily generous but also essential.

The School needs to build up its Financial Endowment, so that it has the confidence and security to plan ahead intelligently. The Legacy Club, as part of the King’s Foundation, exists in part to achieve that objective.

In the sixteenth century Cardinal Pole gave the Mint Yard to the School. Twentieth century gifts enabled the School to build the Maugham Library and Jervis House – the first purpose-built girls’ boarding house – and to plant trees on the Green Court. Most recently the new Junior King’s Music School was funded largely by the bequest from the Legacy Club’s founding President Michael Herbert and his wife Vibeke.

The Shirley Hall, opened in 1957 by the Queen Mother, was financed through a fundraising campaign driven by John Shirley himself. It now stands at the centre of the School’s activities. In 1990 the Recreation Centre, one of the largest projects ever undertaken, was opened. A total of £1.6 million was raised to provide the School with outstanding facilities. In 2009 King’s opened the Edred Wright Music School in the West Wing of the former Grange boarding house. The project was partly financed by a major fundraising campaign.

“King’s changed my life and I shall always be indebted to the School for the opportunities it opened up for me. Living in the shadow of Bell Harry, it somehow gave one’s faith a push and the confidence to believe in oneself. The Legacy Club is a small payback.” Ivor Burt School House 1943-48

At present the School’s charitable endowment mostly consists of land and buildings. The financial burden of conserving what is a major part of the Canterbury World Heritage site needs to be eased to a manageable level. The significant educational benefits of the School’s development plans need to be realised coherently, not piecemeal. Bequests and fundraising play a vital part, but a more substantial endowment would make forward planning much easier.

Do you want to remember King’s? Join the Legacy Club

Why remember King’s in your will?

There are four reasons

n Unlike many other leading schools, and notwithstanding the generosity of past benefactors, King’s does not have a sufficient endowment n Providing places for gifted and deserving pupils is an important characteristic of King’s n King’s needs to keep changing and needs to fund its development plans to do so n King’s enshrines extraordinary values in an ordinary world Richard Ashworth 1960-64 Legacy Club Chairman

The mission of the Legacy Club is to help the School by reaching out to those whose lives have been touched and inspired by King’s. Whatever we have achieved in life, and whatever we leave behind, there is yet one more very special thing we can do. By leaving a legacy, you can plant a seed. Generations from now, your gift will ensure that talented children, regardless of background, can be given an opportunity that will transform their lives. We recognise that you may wish to specify the purpose of your gift whether sporting, musical or academic. Please join us; remember King’s.

The School’s ability to reach out and create opportunities is greatly enhanced by bequests from OKS, parents and others in the extended King’s family, boosting the modest endowment fund in the process. People’s circumstances vary enormously, but every little helps.

The King’s Legacy Club is open to anyone who has included King’s in their will. It has an annual lunch, which is the School’s way of saying thank you and an opportunity for members to reminisce and see how King’s is faring. Members can also benefit from free tickets to many King’s Week and other School events and free membership of the King’s Society. You can choose what to support. Many prefer to leave the ultimate decision to the School so that it can allocate funds with the most beneficial impact when the time comes. Others direct their bequests specifically to support the bursary fund or different capital projects. You can make your bequest in a tax efficient way. There are different types of bequest which are set out in the inserts inside the back flap of this brochure.

The Legacy of Giving Thanks to those who had the vision to give, many more have received a King’s education. Centuries of generosity echo around the walls of King’s.

“Listening to the Prayer for Benefactors at the Commemoration Service I realise how much as a King’s Scholar I benefited from them. I see it as my moral duty, within my means, to add to the benefaction for future generations.” Barry Lock The Grange 1948-53

To get involved call 01227 595567 or mail foundation@kings-school.co.uk The King’s Foundation The King’s School 25 The Precints Canterbury Kent CT1 2ES 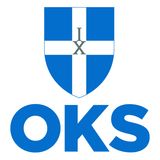