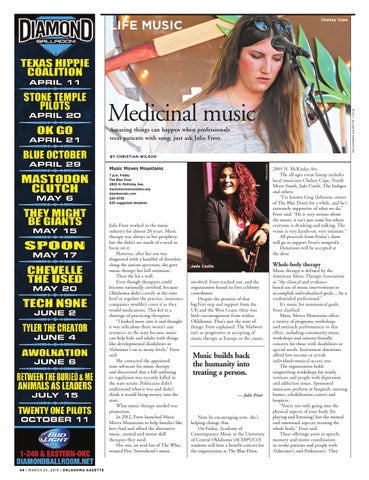 Julie Frost worked in the music industry for almost 20 years. Music therapy was always in her periphery, but she didn’t see much of a need to focus on it. However, after her son was diagnosed with a handful of disorders along the autism spectrum, she gave music therapy her full attention. Then she hit a wall. Even though therapists could become nationally certified, because Oklahoma didn’t certify at the state level or regulate the practice, insurance companies wouldn’t cover it as they would medications. This led to a shortage of practicing therapists. “I looked more into it and thought it was ridiculous there weren’t any resources in the state because music can help kids and adults with things like developmental disabilities or Alzheimer’s on so many levels,” Frost said. She contacted the appointed state advocate for music therapy and discovered that a bill outlining its regulation was recently killed in the state senate. Politicians didn’t understand what it was and didn’t think it would bring money into the state. What music therapy needed was promotion. In 2012, Frost launched Music Moves Mountains to help families like hers find and afford the alternative music, mental and motor skill therapies they need. Her son, an avid fan of The Who, wanted Pete Townshend’s music

2805 N. McKinley Ave. The all-ages event lineup includes local musicians Chelsey Cope, North Meets South, Jade Castle, The Indigos and others. “I’ve known Greg (Johnson, owner of The Blue Door) for a while, and he’s extremely supportive of what we do,” Frost said. “He is very serious about the music; it isn’t just some bar where everyone is drinking and talking. The venue is very hands-on, very intimate.” All proceeds from Friday’s show will go to support Frost’s nonprofit. Donations will be accepted at the door.

involved. Frost reached out, and the organization found its first celebrity contributor. Despite the promise of that big first step and support from the UK and the West Coast, there was little encouragement from within Oklahoma. That’s just the state of things, Frost explained. The Midwest isn’t as progressive or accepting of music therapy as Europe or the coasts.

Music builds back the humanity into treating a person. — Julie Frost

Note by encouraging note, she’s helping change that. On Friday, Academy of Contemporary Music at the University of Central Oklahoma (ACM@UCO) students will host a benefit concert for the organization at The Blue Door,

Music therapy is defined by the American Music Therapy Association as “the clinical and evidencebased use of music interventions to accomplish individualized goals ... by a credentialed professional.” It’s music for nonmusical goals, Frost clarified. Music Moves Mountains offers a variety of programs, workshops and outreach performances to this effect, including community music workshops and sensory-friendly concerts for those with disabilities or special needs. Instrument donations afford low-income or at-risk individuals musical access, too. The organization holds songwriting workshops for youth, veterans and people with depression and addiction issues. Sponsored musicians perform at hospitals, nursing homes, rehabilitation centers and hospices. “You’re not only going into the physical aspects of your body [by playing and listening] but the mental and emotional aspects; treating the whole body,” Frost said. These offerings assist in speech, memory and motor coordination in stroke patients and people with Alzheimer’s and Parkinson’s. They 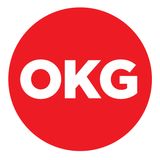