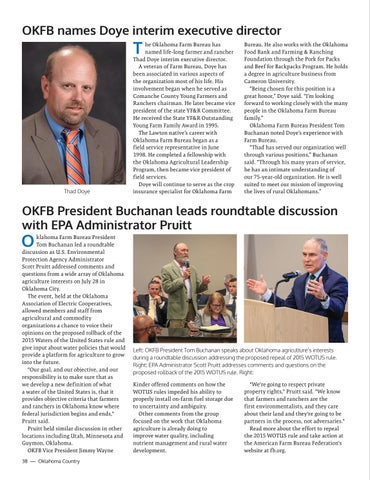 he Oklahoma Farm Bureau has named life-long farmer and rancher Thad Doye interim executive director. A veteran of Farm Bureau, Doye has been associated in various aspects of the organization most of his life. His involvement began when he served as Comanche County Young Farmers and Ranchers chairman. He later became vice president of the state YF&R Committee. He received the State YF&R Outstanding Young Farm Family Award in 1995. The Lawton native’s career with Oklahoma Farm Bureau began as a field service representative in June 1998. He completed a fellowship with the Oklahoma Agricultural Leadership Program, then became vice president of field services. Doye will continue to serve as the crop insurance specialist for Oklahoma Farm

Bureau. He also works with the Oklahoma Food Bank and Farming & Ranching Foundation through the Pork for Packs and Beef for Backpacks Program. He holds a degree in agriculture business from Cameron University. “Being chosen for this position is a great honor,” Doye said. “I’m looking forward to working closely with the many people in the Oklahoma Farm Bureau family.” Oklahoma Farm Bureau President Tom Buchanan noted Doye’s experience with Farm Bureau. “Thad has served our organization well through various positions,” Buchanan said. “Through his many years of service, he has an intimate understanding of our 75-year-old organization. He is well suited to meet our mission of improving the lives of rural Oklahomans.”

OKFB President Buchanan leads roundtable discussion with EPA Administrator Pruitt klahoma Farm Bureau President Tom Buchanan led a roundtable discussion as U.S. Environmental Protection Agency Administrator Scott Pruitt addressed comments and questions from a wide array of Oklahoma agriculture interests on July 28 in Oklahoma City. The event, held at the Oklahoma Association of Electric Cooperatives, allowed members and staff from agricultural and commodity organizations a chance to voice their opinions on the proposed rollback of the 2015 Waters of the United States rule and give input about water policies that would provide a platform for agriculture to grow into the future. "Our goal, and our objective, and our responsibility is to make sure that as we develop a new definition of what a water of the United States is, that it provides objective criteria that farmers and ranchers in Oklahoma know where federal jurisdiction begins and ends," Pruitt said. Pruitt held similar discussion in other locations including Utah, Minnesota and Guymon, Oklahoma. OKFB Vice President Jimmy Wayne 38 — Oklahoma Country

Left: OKFB President Tom Buchanan speaks about Oklahoma agriculture’s interests during a roundtable discussion addressing the proposed repeal of 2015 WOTUS rule. Right: EPA Administrator Scott Pruitt addresses comments and questions on the proposed rollback of the 2015 WOTUS rule. Right: Kinder offered comments on how the WOTUS rules impeded his ability to properly install on-farm fuel storage due to uncertainty and ambiguity. Other comments from the group focused on the work that Oklahoma agriculture is already doing to improve water quality, including nutrient management and rural water development.

"We're going to respect private property rights," Pruitt said. "We know that farmers and ranchers are the first environmentalists, and they care about their land and they're going to be partners in the process, not adversaries." Read more about the effort to repeal the 2015 WOTUS rule and take action at the American Farm Bureau Federation's website at f b.org.