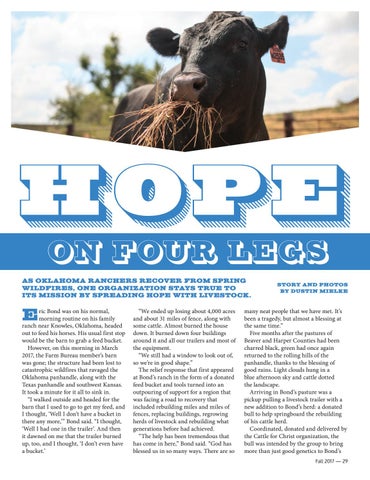 As Oklahoma ranchers recover from spring wildfires, one organization stays true to its mission by spreading hope with livestock.

ric Bond was on his normal, morning routine on his family ranch near Knowles, Oklahoma, headed out to feed his horses. His usual first stop would be the barn to grab a feed bucket. However, on this morning in March 2017, the Farm Bureau member’s barn was gone; the structure had been lost to catastrophic wildfires that ravaged the Oklahoma panhandle, along with the Texas panhandle and southwest Kansas. It took a minute for it all to sink in. “I walked outside and headed for the barn that I used to go to get my feed, and I thought, ‘Well I don’t have a bucket in there any more,’” Bond said. “I thought, ‘Well I had one in the trailer’. And then it dawned on me that the trailer burned up, too, and I thought, ‘I don’t even have a bucket.’

“We ended up losing about 4,000 acres and about 31 miles of fence, along with some cattle. Almost burned the house down. It burned down four buildings around it and all our trailers and most of the equipment. “We still had a window to look out of, so we’re in good shape.” The relief response that first appeared at Bond’s ranch in the form of a donated feed bucket and tools turned into an outpouring of support for a region that was facing a road to recovery that included rebuilding miles and miles of fences, replacing buildings, regrowing herds of livestock and rebuilding what generations before had achieved. “The help has been tremendous that has come in here,” Bond said. “God has blessed us in so many ways. There are so

story and photos by Dustin Mielke

many neat people that we have met. It’s been a tragedy, but almost a blessing at the same time.” Five months after the pastures of Beaver and Harper Counties had been charred black, green had once again returned to the rolling hills of the panhandle, thanks to the blessing of good rains. Light clouds hung in a blue afternoon sky and cattle dotted the landscape. Arriving in Bond’s pasture was a pickup pulling a livestock trailer with a new addition to Bond’s herd: a donated bull to help springboard the rebuilding of his cattle herd. Coordinated, donated and delivered by the Cattle for Christ organization, the bull was intended by the group to bring more than just good genetics to Bond’s Fall 2017 — 29