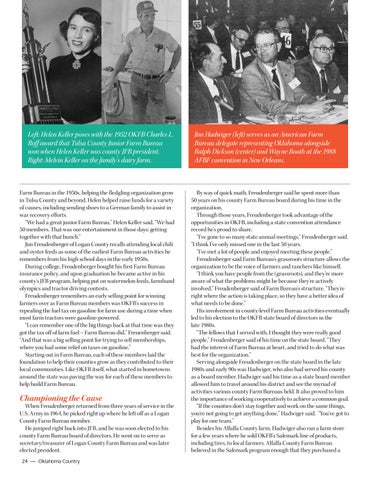 Farm Bureau in the 1950s, helping the fledgling organization grow in Tulsa County and beyond. Helen helped raise funds for a variety of causes, including sending shoes to a German family to assist in war recovery efforts. “We had a great junior Farm Bureau,” Helen Keller said. “We had 50 members. That was our entertainment in those days: getting together with that bunch.” Jim Freudenberger of Logan County recalls attending local chili and oyster feeds as some of the earliest Farm Bureau activities he remembers from his high school days in the early 1950s. During college, Freudenberger bought his first Farm Bureau insurance policy, and upon graduation he became active in his county’s JFB program, helping put on watermelon feeds, farmhand olympics and tractor driving contests. Freudenberger remembers an early selling point for winning farmers over as Farm Bureau members was OKFB’s success in repealing the fuel tax on gasoline for farm use during a time when most farm tractors were gasoline-powered. “I can remember one of the big things back at that time was they got the tax off of farm fuel – Farm Bureau did,” Freuenberger said. “And that was a big selling point for trying to sell memberships, where you had some relief on taxes on gasoline.” Starting out in Farm Bureau, each of these members laid the foundation to help their counties grow as they contributed to their local communities. Like OKFB itself, what started in hometowns around the state was paving the way for each of these members to help build Farm Bureau.

By way of quick math, Freudenberger said he spent more than 50 years on his county Farm Bureau board during his time in the organization. Through those years, Freudenberger took advantage of the opportunities in OKFB, including a state convention attendance record he’s proud to share. “I’ve gone to so many state annual meetings,” Freudenberger said. “I think I’ve only missed one in the last 50 years. “I’ve met a lot of people and enjoyed meeting these people.” Freudenberger said Farm Bureau’s grassroots structure allows the organization to be the voice of farmers and ranchers like himself. “I think you have people from the (grassroots), and they’re more aware of what the problems might be because they’re actively involved,” Freudenberger said of Farm Bureau’s structure. “They’re right where the action is taking place, so they have a better idea of what needs to be done.” His involvement in county-level Farm Bureau activities eventually led to his election to the OKFB state board of directors in the late 1980s. “The fellows that I served with, I thought they were really good people,” Freudenberger said of his time on the state board. “They had the interest of Farm Bureau at heart, and tried to do what was best for the organization.” Serving alongside Freudenberger on the state board in the late 1980s and early 90s was Hadwiger, who also had served his county as a board member. Hadwiger said his time as a state board member allowed him to travel around his district and see the myriad of activities various county Farm Bureaus held. It also proved to him the importance of working cooperatively to achieve a common goal. “If the counties don’t stay together and work on the same things, you’re not going to get anything done,” Hadwiger said. “You’ve got to play for one team.” Besides his Alfalfa County farm, Hadwiger also ran a farm store for a few years where he sold OKFB’s Safemark line of products, including tires, to local farmers. Alfalfa County Farm Bureau believed in the Safemark program enough that they purchased a