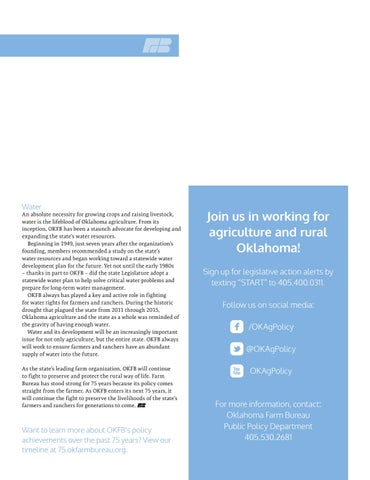 An absolute necessity for growing crops and raising livestock, water is the lifeblood of Oklahoma agriculture. From its inception, OKFB has been a staunch advocate for developing and expanding the state’s water resources. Beginning in 1949, just seven years after the organization’s founding, members recommended a study on the state’s water resources and began working toward a statewide water development plan for the future. Yet not until the early 1980s – thanks in part to OKFB – did the state Legislature adopt a statewide water plan to help solve critical water problems and prepare for long-term water management. OKFB always has played a key and active role in fighting for water rights for farmers and ranchers. During the historic drought that plagued the state from 2011 through 2015, Oklahoma agriculture and the state as a whole was reminded of the gravity of having enough water. Water and its development will be an increasingly important issue for not only agriculture, but the entire state. OKFB always will work to ensure farmers and ranchers have an abundant supply of water into the future. As the state’s leading farm organization, OKFB will continue to fight to preserve and protect the rural way of life. Farm Bureau has stood strong for 75 years because its policy comes straight from the farmer. As OKFB enters its next 75 years, it will continue the fight to preserve the livelihoods of the state’s farmers and ranchers for generations to come.

Want to learn more about OKFB's policy achievements over the past 75 years? View our timeline at 75.okfarmbureau.org.

Join us in working for agriculture and rural Oklahoma! Sign up for legislative action alerts by texting “START” to 405.400.0311. Follow us on social media: /OKAgPolicy @OKAgPolicy OKAgPolicy