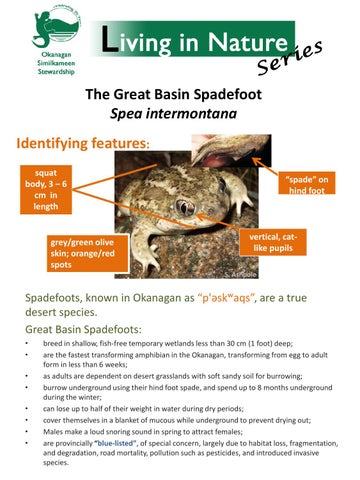 breed in shallow, fish-free temporary wetlands less than 30 cm (1 foot) deep; are the fastest transforming amphibian in the Okanagan, transforming from egg to adult form in less than 6 weeks; as adults are dependent on desert grasslands with soft sandy soil for burrowing; burrow underground using their hind foot spade, and spend up to 8 months underground during the winter; can lose up to half of their weight in water during dry periods; cover themselves in a blanket of mucous while underground to prevent drying out; Males make a loud snoring sound in spring to attract females; are provincially “blue-listed”, of special concern, largely due to habitat loss, fragmentation, and degradation, road mortality, pollution such as pesticides, and introduced invasive species.

Why are Spadefoots important? • • •

Spadefoots contribute to nutrient links between land and water; Spadefoots are important prey for many animals and predators of many species, such as insects including mosquitoes; Spadefoots contribute to the health of Okanagan wetland ecosystems. Wetlands: – are one of the Earth’s most productive ecosystems; – are the earth’s “kidneys”, filtering our drinking water and recharging groundwater; – buffer against floods and drought; – provide shade, refuge, food, and medicine for animals and humans; – provide habitat for over 600 species of wildlife, including more than one-third of Canada’s species at risk.

Thank you to the following partners and funders in this project: 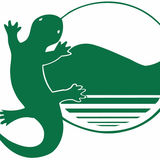