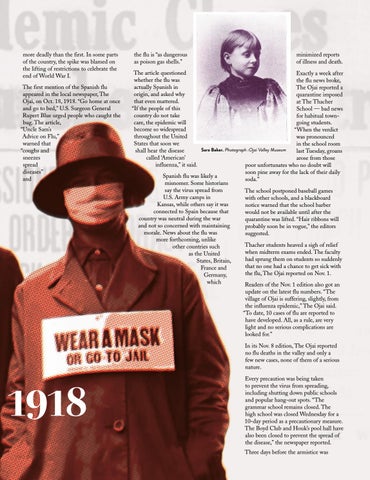 more deadly than the first. In some parts of the country, the spike was blamed on the lifting of restrictions to celebrate the end of World War I. The first mention of the Spanish flu appeared in the local newspaper, The Ojai, on Oct. 18, 1918. “Go home at once and go to bed,” U.S. Surgeon General Rupert Blue urged people who caught the bug. The article, “Uncle Sam’s Advice on Flu,” warned that “coughs and sneezes spread diseases” and

the flu is “as dangerous as poison gas shells.”

minimized reports of illness and death.

The article questioned Exactly a week after whether the flu was the flu news broke, actually Spanish in The Ojai reported a origin, and asked why quarantine imposed that even mattered. at The Thacher “If the people of this School — bad news country do not take for habitual towncare, the epidemic will going students. become so widespread “When the verdict throughout the United was pronounced States that soon we in the school room Sara Baker. Photograph :Ojai Valley Museum shall hear the disease last Tuesday, groans called ‘American’ arose from those influenza,” it said. poor unfortunates who no doubt will soon pine away for the lack of their daily Spanish flu was likely a soda.” misnomer. Some historians say the virus spread from The school postponed baseball games U.S. Army camps in with other schools, and a blackboard Kansas, while others say it was notice warned that the school barber connected to Spain because that would not be available until after the country was neutral during the war quarantine was lifted. “Hair ribbons will and not so concerned with maintaining probably soon be in vogue,” the editors morale. News about the flu was suggested. more forthcoming, unlike Thacher students heaved a sigh of relief other countries such when midterm exams ended. The faculty as the United had sprung them on students so suddenly States, Britain, that no one had a chance to get sick with France and the flu, The Ojai reported on Nov. 1. Germany, which Readers of the Nov. 1 edition also got an update on the latest flu numbers. “The village of Ojai is suffering, slightly, from the influenza epidemic,” The Ojai said. “To date, 10 cases of flu are reported to have developed. All, as a rule, are very light and no serious complications are looked for.” In its Nov. 8 edition, The Ojai reported no flu deaths in the valley and only a few new cases, none of them of a serious nature.

Every precaution was being taken to prevent the virus from spreading, including shutting down public schools and popular hang-out spots. “The grammar school remains closed. The high school was closed Wednesday for a 10-day period as a precautionary measure. The Boyd Club and Houk’s pool hall have also been closed to prevent the spread of the disease,” the newspaper reported. Three days before the armistice was