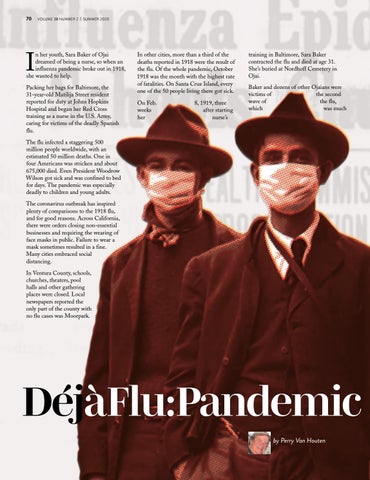 n her youth, Sara Baker of Ojai dreamed of being a nurse, so when an influenza pandemic broke out in 1918, she wanted to help.

Packing her bags for Baltimore, the 31-year-old Matilija Street resident reported for duty at Johns Hopkins Hospital and began her Red Cross training as a nurse in the U.S. Army, caring for victims of the deadly Spanish flu.

In other cities, more than a third of the deaths reported in 1918 were the result of the flu. Of the whole pandemic, October 1918 was the month with the highest rate of fatalities. On Santa Cruz Island, every one of the 50 people living there got sick. On Feb. weeks her

training in Baltimore, Sara Baker contracted the flu and died at age 31. She’s buried at Nordhoff Cemetery in Ojai. Baker and dozens of other Ojaians were victims of the second wave of the flu, which was much

The flu infected a staggering 500 million people worldwide, with an estimated 50 million deaths. One in four Americans was stricken and about 675,000 died. Even President Woodrow Wilson got sick and was confined to bed for days. The pandemic was especially deadly to children and young adults. The coronavirus outbreak has inspired plenty of comparisons to the 1918 flu, and for good reasons. Across California, there were orders closing non-essential businesses and requiring the wearing of face masks in public. Failure to wear a mask sometimes resulted in a fine. Many cities embraced social distancing. In Ventura County, schools, churches, theaters, pool halls and other gathering places were closed. Local newspapers reported the only part of the county with no flu cases was Moorpark.