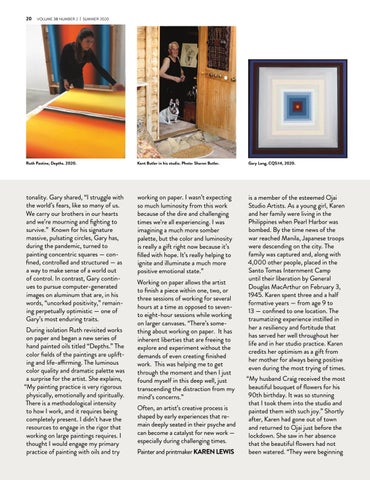 tonality. Gary shared, “I struggle with the world’s fears, like so many of us. We carry our brothers in our hearts and we’re mourning and fighting to survive.” Known for his signature massive, pulsating circles, Gary has, during the pandemic, turned to painting concentric squares — confined, controlled and structured — as a way to make sense of a world out of control. In contrast, Gary continues to pursue computer-generated images on aluminum that are, in his words, “uncorked positivity,” remaining perpetually optimistic — one of Gary’s most enduring traits.

working on paper. I wasn’t expecting so much luminosity from this work because of the dire and challenging times we’re all experiencing. I was imagining a much more somber palette, but the color and luminosity is really a gift right now because it’s filled with hope. It’s really helping to ignite and illuminate a much more positive emotional state.”

is a member of the esteemed Ojai Studio Artists. As a young girl, Karen and her family were living in the Philippines when Pearl Harbor was bombed. By the time news of the war reached Manila, Japanese troops were descending on the city. The family was captured and, along with 4,000 other people, placed in the Santo Tomas Internment Camp until their liberation by General Douglas MacArthur on February 3, 1945. Karen spent three and a half formative years — from age 9 to 13 — confined to one location. The traumatizing experience instilled in her a resiliency and fortitude that has served her well throughout her life and in her studio practice. Karen credits her optimism as a gift from her mother for always being positive even during the most trying of times.

During isolation Ruth revisited works on paper and began a new series of hand painted oils titled “Depths.” The color fields of the paintings are uplifting and life-affirming. The luminous color quality and dramatic palette was a surprise for the artist. She explains, “My painting practice is very rigorous physically, emotionally and spiritually. There is a methodological intensity to how I work, and it requires being completely present. I didn’t have the resources to engage in the rigor that working on large paintings requires. I thought I would engage my primary practice of painting with oils and try

Working on paper allows the artist to finish a piece within one, two, or three sessions of working for several hours at a time as opposed to sevento eight-hour sessions while working on larger canvases. “There’s something about working on paper. It has inherent liberties that are freeing to explore and experiment without the demands of even creating finished work. This was helping me to get through the moment and then I just found myself in this deep well, just transcending the distraction from my mind’s concerns.” Often, an artist’s creative process is shaped by early experiences that remain deeply seated in their psyche and can become a catalyst for new work — especially during challenging times. Painter and printmaker KAREN LEWIS

“My husband Craig received the most beautiful bouquet of flowers for his 90th birthday. It was so stunning that I took them into the studio and painted them with such joy.” Shortly after, Karen had gone out of town and returned to Ojai just before the lockdown. She saw in her absence that the beautiful flowers had not been watered. “They were beginning