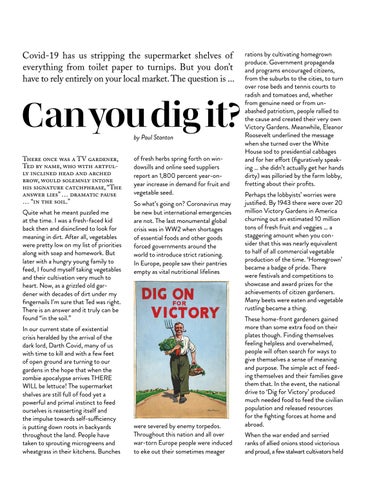 Covid-19 has us stripping the supermarket shelves of everything from toilet paper to turnips. But you don’t have to rely entirely on your local market. The question is ...

Can you dig it? by Paul Stanton

There once was a TV gardener, Ted by name, who with artfully inclined head and arched brow, would solemnly intone his signature catchphrase, “The answer lies” … dramatic pause … “in the soil.” Quite what he meant puzzled me at the time. I was a fresh-faced kid back then and disinclined to look for meaning in dirt. After all, vegetables were pretty low on my list of priorities along with soap and homework. But later with a hungry young family to feed, I found myself taking vegetables and their cultivation very much to heart. Now, as a grizzled old gardener with decades of dirt under my fingernails I’m sure that Ted was right. There is an answer and it truly can be found “in the soil.” In our current state of existential crisis heralded by the arrival of the dark lord, Darth Covid, many of us with time to kill and with a few feet of open ground are turning to our gardens in the hope that when the zombie apocalypse arrives THERE WILL be lettuce! The supermarket shelves are still full of food yet a powerful and primal instinct to feed ourselves is reasserting itself and the impulse towards self-sufficiency is putting down roots in backyards throughout the land. People have taken to sprouting microgreens and wheatgrass in their kitchens. Bunches

of fresh herbs spring forth on windowsills and online seed suppliers report an 1,800 percent year-onyear increase in demand for fruit and vegetable seed. So what’s going on? Coronavirus may be new but international emergencies are not. The last monumental global crisis was in WW2 when shortages of essential foods and other goods forced governments around the world to introduce strict rationing. In Europe, people saw their pantries empty as vital nutritional lifelines

were severed by enemy torpedos. Throughout this nation and all over war-torn Europe people were induced to eke out their sometimes meager

rations by cultivating homegrown produce. Government propaganda and programs encouraged citizens, from the suburbs to the cities, to turn over rose beds and tennis courts to radish and tomatoes and, whether from genuine need or from unabashed patriotism, people rallied to the cause and created their very own Victory Gardens. Meanwhile, Eleanor Roosevelt underlined the message when she turned over the White House sod to presidential cabbages and for her effort (figuratively speaking … she didn’t actually get her hands dirty) was pilloried by the farm lobby, fretting about their profits. Perhaps the lobbyists’ worries were justified. By 1943 there were over 20 million Victory Gardens in America churning out an estimated 10 million tons of fresh fruit and veggies … a staggering amount when you consider that this was nearly equivalent to half of all commercial vegetable production of the time. ‘Homegrown’ became a badge of pride. There were festivals and competitions to showcase and award prizes for the achievements of citizen gardeners. Many beets were eaten and vegetable rustling became a thing. These home-front gardeners gained more than some extra food on their plates though. Finding themselves feeling helpless and overwhelmed, people will often search for ways to give themselves a sense of meaning and purpose. The simple act of feeding themselves and their families gave them that. In the event, the national drive to ‘Dig for Victory’ produced much needed food to feed the civilian population and released resources for the fighting forces at home and abroad. When the war ended and serried ranks of allied onions stood victorious and proud, a few stalwart cultivators held