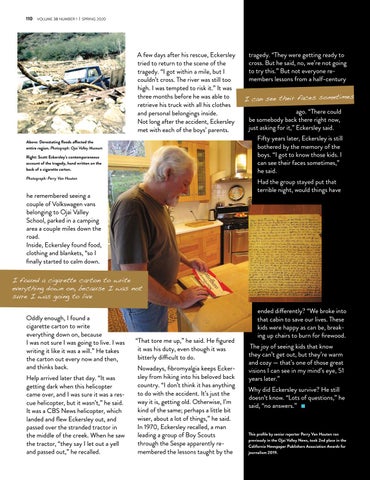 A few days after his rescue, Eckersley tried to return to the scene of the tragedy. “I got within a mile, but I couldn’t cross. The river was still too high. I was tempted to risk it.” It was three months before he was able to retrieve his truck with all his clothes and personal belongings inside. Not long after the accident, Eckersley met with each of the boys’ parents. Above: Devestating floods affected the entire region. Photograph: Ojai Valley Museum Right: Scott Eckersley’s contemporaneous account of the tragedy, hand written on the back of a cigarette carton. Photograph: Perry Van Houten

tragedy. “They were getting ready to cross. But he said, no, we’re not going to try this.” But not everyone remembers lessons from a half-century I can see their faces sometimes

ago. “There could be somebody back there right now, just asking for it,” Eckersley said. Fifty years later, Eckersley is still bothered by the memory of the boys. “I got to know those kids. I can see their faces sometimes,” he said. Had the group stayed put that terrible night, would things have

“That tore me up,” he said. He figured it was his duty, even though it was bitterly difficult to do. Nowadays, fibromyalgia keeps Eckersley from hiking into his beloved back country. “I don’t think it has anything to do with the accident. It’s just the way it is, getting old. Otherwise, I’m kind of the same; perhaps a little bit wiser, about a lot of things,” he said. In 1970, Eckersley recalled, a man leading a group of Boy Scouts through the Sespe apparently remembered the lessons taught by the

ended differently? “We broke into that cabin to save our lives. These kids were happy as can be, breaking up chairs to burn for firewood. The joy of seeing kids that know they can’t get out, but they’re warm and cozy — that’s one of those great visions I can see in my mind’s eye, 51 years later.” Why did Eckersley survive? He still doesn’t know. “Lots of questions,” he said, “no answers.”