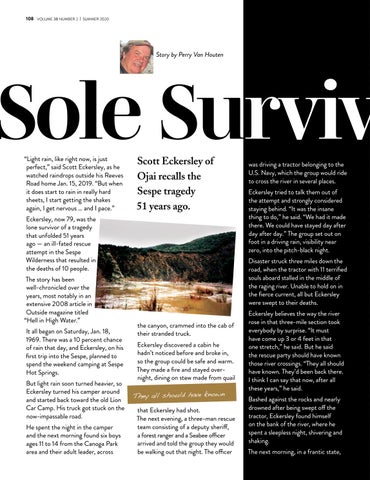 Sole Surviv “Light rain, like right now, is just perfect,” said Scott Eckersley, as he watched raindrops outside his Reeves Road home Jan. 15, 2019. “But when it does start to rain in really hard sheets, I start getting the shakes again, I get nervous … and I pace.”

Scott Eckersley of Ojai recalls the Sespe tragedy 51 years ago.

Eckersley, now 79, was the lone survivor of a tragedy that unfolded 51 years ago — an ill-fated rescue attempt in the Sespe Wilderness that resulted in the deaths of 10 people. The story has been well-chronicled over the years, most notably in an extensive 2008 article in Outside magazine titled “Hell in High Water.” It all began on Saturday, Jan. 18, 1969. There was a 10 percent chance of rain that day, and Eckersley, on his first trip into the Sespe, planned to spend the weekend camping at Sespe Hot Springs. But light rain soon turned heavier, so Eckersley turned his camper around and started back toward the old Lion Car Camp. His truck got stuck on the now-impassable road. He spent the night in the camper and the next morning found six boys ages 11 to 14 from the Canoga Park area and their adult leader, across

was driving a tractor belonging to the U.S. Navy, which the group would ride to cross the river in several places. Eckersley tried to talk them out of the attempt and strongly considered staying behind. “It was the insane thing to do,” he said. “We had it made there. We could have stayed day after day after day.” The group set out on foot in a driving rain, visibility near zero, into the pitch-black night. Disaster struck three miles down the road, when the tractor with 11 terrified souls aboard stalled in the middle of the raging river. Unable to hold on in the fierce current, all but Eckersley were swept to their deaths.

the canyon, crammed into the cab of their stranded truck. Eckersley discovered a cabin he hadn’t noticed before and broke in, so the group could be safe and warm. They made a fire and stayed overnight, dining on stew made from quail They all should have known

that Eckersley had shot. The next evening, a three-man rescue team consisting of a deputy sheriff, a forest ranger and a Seabee officer arrived and told the group they would be walking out that night. The officer

Eckersley believes the way the river rose in that three-mile section took everybody by surprise. “It must have come up 3 or 4 feet in that one stretch,” he said. But he said the rescue party should have known those river crossings. “They all should have known. They’d been back there. I think I can say that now, after all these years,” he said. Bashed against the rocks and nearly drowned after being swept off the tractor, Eckersley found himself on the bank of the river, where he spent a sleepless night, shivering and shaking. The next morning, in a frantic state,