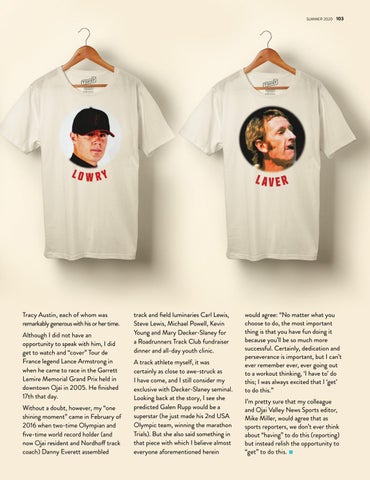 Tracy Austin, each of whom was remarkably generous with his or her time. Although I did not have an opportunity to speak with him, I did get to watch and “cover” Tour de France legend Lance Armstrong in when he came to race in the Garrett Lemire Memorial Grand Prix held in downtown Ojai in 2005. He finished 17th that day. Without a doubt, however, my “one shining moment” came in February of 2016 when two-time Olympian and five-time world record holder (and now Ojai resident and Nordhoff track coach) Danny Everett assembled

track and field luminaries Carl Lewis, Steve Lewis, Michael Powell, Kevin Young and Mary Decker-Slaney for a Roadrunners Track Club fundraiser dinner and all-day youth clinic. A track athlete myself, it was certainly as close to awe-struck as I have come, and I still consider my exclusive with Decker-Slaney seminal. Looking back at the story, I see she predicted Galen Rupp would be a superstar (he just made his 2nd USA Olympic team, winning the marathon Trials). But she also said something in that piece with which I believe almost everyone aforementioned herein

would agree: “No matter what you choose to do, the most important thing is that you have fun doing it because you’ll be so much more successful. Certainly, dedication and perseverance is important, but I can’t ever remember ever, ever going out to a workout thinking, ‘I have to’ do this; I was always excited that I ‘get’ to do this.” I’m pretty sure that my colleague and Ojai Valley News Sports editor, Mike Miller, would agree that as sports reporters, we don’t ever think about “having” to do this (reporting) but instead relish the opportunity to “get” to do this.