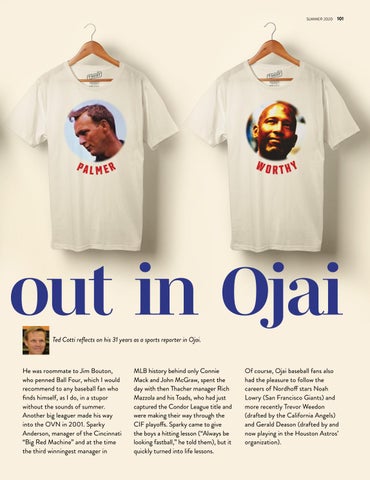 out in Ojai Ted Cotti reflects on his 31 years as a sports reporter in Ojai.

He was roommate to Jim Bouton, who penned Ball Four, which I would recommend to any baseball fan who finds himself, as I do, in a stupor without the sounds of summer. Another big leaguer made his way into the OVN in 2001. Sparky Anderson, manager of the Cincinnati “Big Red Machine” and at the time the third winningest manager in

MLB history behind only Connie Mack and John McGraw, spent the day with then Thacher manager Rich Mazzola and his Toads, who had just captured the Condor League title and were making their way through the CIF playoffs. Sparky came to give the boys a hitting lesson (“Always be looking fastball,” he told them), but it quickly turned into life lessons.

Of course, Ojai baseball fans also had the pleasure to follow the careers of Nordhoff stars Noah Lowry (San Francisco Giants) and more recently Trevor Weedon (drafted by the California Angels) and Gerald Deason (drafted by and now playing in the Houston Astros’ organization).