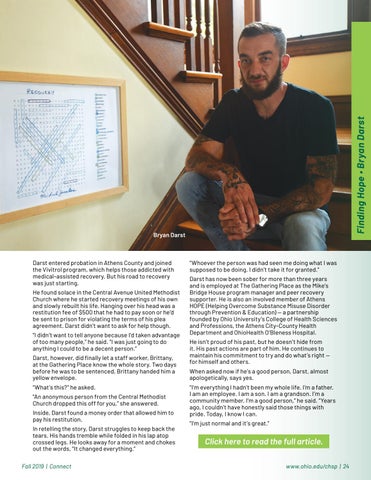 Darst entered probation in Athens County and joined the Vivitrol program, which helps those addicted with medical-assisted recovery. But his road to recovery was just starting. He found solace in the Central Avenue United Methodist Church where he started recovery meetings of his own and slowly rebuilt his life. Hanging over his head was a restitution fee of $500 that he had to pay soon or he’d be sent to prison for violating the terms of his plea agreement. Darst didn’t want to ask for help though. “I didn’t want to tell anyone because I’d taken advantage of too many people,” he said. “I was just going to do anything I could to be a decent person.” Darst, however, did finally let a staff worker, Brittany, at the Gathering Place know the whole story. Two days before he was to be sentenced, Brittany handed him a yellow envelope. “What’s this?” he asked. “An anonymous person from the Central Methodist Church dropped this off for you,” she answered. Inside, Darst found a money order that allowed him to pay his restitution. In retelling the story, Darst struggles to keep back the tears. His hands tremble while folded in his lap atop crossed legs. He looks away for a moment and chokes out the words, “It changed everything.” Fall 2019 | Connect

“Whoever the person was had seen me doing what I was supposed to be doing. I didn’t take it for granted.” Darst has now been sober for more than three years and is employed at The Gathering Place as the Mike’s Bridge House program manager and peer recovery supporter. He is also an involved member of Athens HOPE (Helping Overcome Substance Misuse Disorder through Prevention &amp; Education) — a partnership founded by Ohio University’s College of Health Sciences and Professions, the Athens City-County Health Department and OhioHealth O’Bleness Hospital. He isn’t proud of his past, but he doesn’t hide from it. His past actions are part of him. He continues to maintain his commitment to try and do what’s right — for himself and others. When asked now if he’s a good person, Darst, almost apologetically, says yes. “I’m everything I hadn’t been my whole life. I’m a father. I am an employee. I am a son. I am a grandson. I’m a community member. I’m a good person,” he said. “Years ago, I couldn’t have honestly said those things with pride. Today, I know I can. “I’m just normal and it’s great.” 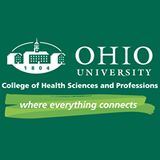