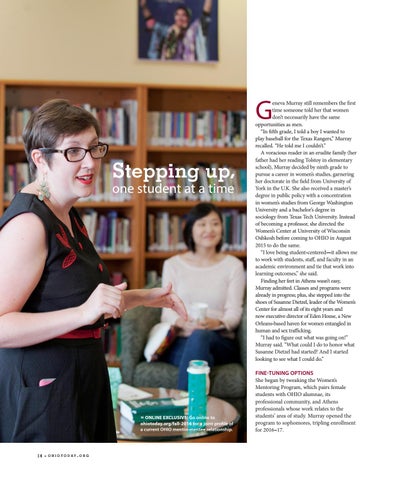 G Stepping up, one student at a time

ohiotoday.org/fall-2016 for a joint profile of a current OHIO mentor-mentee relationship.

eneva Murray still remembers the first time someone told her that women don’t necessarily have the same opportunities as men. “In fifth grade, I told a boy I wanted to play baseball for the Texas Rangers,” Murray recalled. “He told me I couldn’t.” A voracious reader in an erudite family (her father had her reading Tolstoy in elementary school), Murray decided by ninth grade to pursue a career in women’s studies, garnering her doctorate in the field from University of York in the U.K. She also received a master’s degree in public policy with a concentration in women’s studies from George Washington University and a bachelor’s degree in sociology from Texas Tech University. Instead of becoming a professor, she directed the Women’s Center at University of Wisconsin Oshkosh before coming to OHIO in August 2015 to do the same. “I love being student-centered—it allows me to work with students, staff, and faculty in an academic environment and tie that work into learning outcomes,” she said. Finding her feet in Athens wasn’t easy, Murray admitted. Classes and programs were already in progress; plus, she stepped into the shoes of Susanne Dietzel, leader of the Women’s Center for almost all of its eight years and now executive director of Eden House, a New Orleans-based haven for women entangled in human and sex trafficking. “I had to figure out what was going on!” Murray said. “What could I do to honor what Susanne Dietzel had started? And I started looking to see what I could do.” FINE-TUNING OPTIONS She began by tweaking the Women’s Mentoring Program, which pairs female students with OHIO alumnae, its professional community, and Athens professionals whose work relates to the students’ area of study. Murray opened the program to sophomores, tripling enrollment for 2016–17. 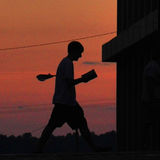