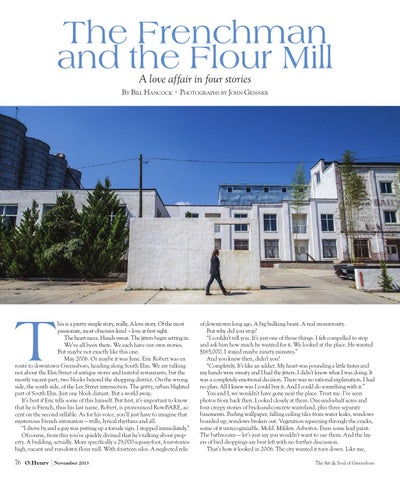 his is a pretty simple story, really. A love story. Of the most passionate, most obsessive kind — love at first sight. The heart races. Hands sweat. The jitters begin setting in. We’ve all been there. We each have our own stories. But maybe not exactly like this one. May 2006. Or maybe it was June. Eric Robert was en route to downtown Greensboro, heading along South Elm. We are talking not about the Elm Street of antique stores and tasteful restaurants, but the mostly vacant part, two blocks beyond the shopping district. On the wrong side, the south side, of the Lee Street intersection. The gritty, urban blighted part of South Elm. Just one block distant. But a world away. It’s best if Eric tells some of this himself. But first, it’s important to know that he is French, thus his last name, Robert, is pronounced Row-BARE, accent on the second syllable. As for his voice, you’ll just have to imagine that mysterious French intonation — trills, lyrical rhythms and all. “I drove by and a guy was putting up a for-sale sign. I stopped immediately.” Of course, from this you’ve quickly divined that he’s talking about property. A building, actually. More specifically a 29,000-square-foot, four-storieshigh, vacant and run-down flour mill. With fourteen silos. A neglected relic

of downtown long ago. A big hulking beast. A real monstrosity. But why did you stop? “I couldn’t tell you. It’s just one of those things. I felt compelled to stop and ask him how much he wanted for it. We looked at the place. He wanted $165,000. I stayed maybe ninety minutes.” And you knew then, didn’t you? “Completely. It’s like an addict. My heart was pounding a little faster and my hands were sweaty and I had the jitters. I didn’t know what I was doing. It was a completely emotional decision. There was no rational explanation. I had no plan. All I knew was I could buy it. And I could do something with it.” You and I, we wouldn’t have gone near the place. Trust me. I’ve seen photos from back then. Looked closely at them. One-and-a-half acres and four creepy stories of brick-and-concrete wasteland, plus three separate basements. Peeling wallpaper, falling ceiling tiles from water leaks, windows boarded up, windows broken out. Vegetation squeezing through the cracks, some of it unrecognizable. Mold. Mildew. Asbestos. Even some lead paint. The bathrooms — let’s just say you wouldn’t want to use them. And the layers of bird droppings are best left with no further discussion. That’s how it looked in 2006. The city wanted it torn down. Like me, The Art &amp; Soul of Greensboro 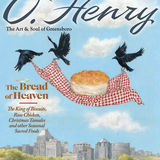