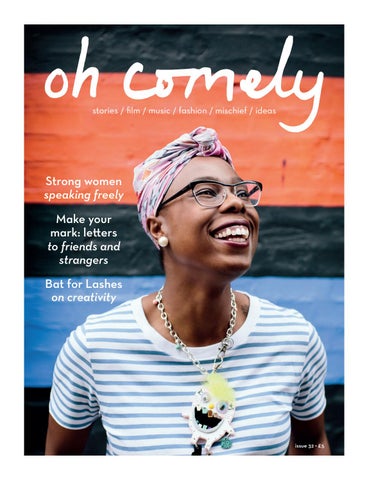 62 Letters of the heart Sophie Brown wrote notes to her exes, never planning to send them. Until now…

46 Freedom of expression A culture no longer in hiding

80 The other way round Will Jarvis writes left-handed 82 Laps of longhand Tanya Shadrick, writer in residence at Pells Pool, on her project, 'Wild Patience' 110 Interception Sarah Musgrove shares a secret

52 Sundae girl Style out your summer

74 Subscribe Treat yourself to a year of Oh Comely

24 Routes to creativity What is it about the postman's profession that's so enticed dreamers and thinkers?

88 Women who changed the world Sophie Scholl, The White Rose

44 How do you lose a language? (And then find it again?) Three once-forgotten tongues making a comeback 94 Beyond postcards: holiday souvenirs Six of the very best bits of tat 116 Putting pen to paper Exploring writing therapies at Bethlem 118 Please use the postcode Post that made it home against the odds

Cover portrait is of Jools Walker by Liz Seabrook. Jools is wearing: a dogtooth silk scarf from Harlig Life; Prada glasses; Topshop pearl earrings; a Tatty Devine x Kit Neale monster necklace: and a Breton tee from Cos. We opened this issue with your very own library page. Use it to sign this copy of Oh Comely in and out when you lend it to friends. It's followed by our favourite pangram, a sentence featuring every letter of the alphabet. Pages four and five feature Luna Craig's gorgeous photography of the Canadian wilds, plus a few friends' hands. You can follow Luna's atmospheric Instagram account at @wisemamawolf. There'll be more from her next issue, out on 13 October 2016.

Jotted in notebooks, blown up on adverts, typed on birthday cards and hidden in tins of spaghetti. Letters are everywhere. You can write them by hand, carve them out of hard materials, mastermind them through pixels or intricately paint them. We asked four artists – two traditional, two modern – to make us a letter each, opposite, and paid them a visit to see how they work.

Character studies Natasha Khan is back as The Bride in her new album. We met the woman behind Bat For Lashes to discuss its themes – loss, self-discovery and why we link love to happiness interview linnea enström portraits clare hewitt

There’s a trace of eyeshadow on Natasha Khan’s eyelids. Although the café we’re in is dimly lit, even a little smoky, I can make out faint lines of blue when she moves her head to the side, sweeping strands of black hair out of her eyes. As Bat For Lashes, Natasha is known for bringing her surreal musical worlds alive. The release of her fourth album sees her adopting the persona (and neon makeup) of The Bride, a woman whose fiancé dies on their wedding day. The idea came while Natasha was developing a script for the short film I Do (which premiered at the Tribeca Film Festival in New York earlier this year), and became increasingly interested in the emotional landscape of the brideto-be. Out of a sketch of a burning car and collage of 1940s pictures grew a desert universe inhabited by Elvis impersonators, vagabonds and cults of women. The song titles came first, like scenes in a film. Natasha then wrote the music to the titles with an electric guitar and omnichord, a kitsch 1980s instrument from California that she describes as “a weird electronic harp”. But beneath the conceptual theatricality and Lynchian aesthetic, the subtly intricate songs explore Natasha’s own experiences with relationships and commitment. This September marks 10 years since her debut album Fur and Gold was released and The Bride revisits the misty, long and winding roads of those early stories. The wide-eyed girl who leaves her partner on ‘What’s A Girl To Do?’ as the embers of romance start to turn cold has grown into a woman eager to explore the more shadowy territory of why

that is. Does love equal happiness? Or are both love and happiness way more complex than the first trembling touch of any budding relationship? As The Bride slowly comes to terms with the loss of her fiancé, she’s also coming to terms with herself. A glow of hope is ignited towards the end of the album as Natasha’s clear-cut vocals entwine with a comforting bass line: “One of these nights, one of these days / I will love again.” When The Bride sets out on the honeymoon alone, it seems like she goes on an internal journey, in comparison to what she would have experienced with her husband. I think she has to go through the dark nights of the soul to love again and find a place where she can be strong in herself. Sometimes we think of a husband as life being complete, like everything’s sorted out because you met the man you love. Even if you’re with someone, you’re always doing the journey alone internally. A relationship can sometimes be a nice distraction from having to do the work on yourself. It seems like the story can speak to different forms of loss. If you take away the narrative arc, the story can apply to any form of loss. Or something being taken away from you that you thought constructed your life or defined you. What do you do in those moments? Often what happens is a real thing of beauty. You don’t know where you are, but sometimes the dark abyss of the void gives birth to something new. We’re all in a bit of a void at the 

What we’re reading This issue, four writers share their thoughts on favourite epistolary books Letters to Anyone and Everyone by Toon Tellegen words jason ward Noah Ward owns a suspicious number of books for someone who can’t read. In his defence, he is seven months old and only recently got around to learning how to laugh. How can one be expected to read, Noah might argue (if he were capable of speech or standing without assistance), if one is unable to laugh at the words? My dashing young nephew is unaware of the commitment I have made to his future, which is probably for the best as that commitment is to thoroughly indoctrinate him. The nefarious plan is simple: for every special occasion in Noah’s life I will give him a book. Birthdays, Christmases, rainy bank holidays, bouts of chickenpox. Maybe even Whitsun if he’s lucky. If all goes well he’ll eventually be able to swim in his collection like a miserly Scottish mallard. I’m aware that it’s likely he’ll love this at first and then hate it, but hopefully he’ll eventually come back to it again. If he doesn’t then at least Dumfries’ charity shops will remain well stocked. I knew instinctively what the first book would be: Letters to Anyone and Everyone by Toon Tellegen. The Dutch writer and poet has written more than 300 animal stories across a quarter of a century, and it’s surely a crime that his work is virtually unknown here. Letters to Anyone and Everyone covers all manner of peculiar correspondence: an elephant writing to a snail (“May I invite you to dance with me on top of your house? Just a few steps?”), a sparrow writing to a crow (“I think you squawk beautifully. Sadly, but that’s what makes it so beautiful”), a squirrel

writing to a letter (“It feels very strange to be writing to you, because you get bigger as I write”), a mole writing to himself (“Dear Mole, Yours sincerely, The Mole”). Funny, whimsical and surreal, Tellegen’s stories reveal themselves to be full of great longing and melancholy. They are striking in their simplicity: there is only one forest, one river, one ocean, one oak tree. I chose the book not just because it contains the precise kind of magic common to the finest children’s literature, but because it depicts a world that venerates cakes and letters and dancing and kind gestures. A world where it’s okay to be sad, and okay to be happy, too. A world that Noah might seek for himself one day, when he is older and finally masters compound sentences and waving.

84 Charing Cross Road by Helene Hanff words frances ambler This book is one of the cornerstones of my lending library. Soothing and heartening, I recommend a reading every time you’re feeling disenchanted with life. I reckon it’s virtually impossible not to be charmed by this simple – but real-life – story of how, through their correspondence, a wise-cracking, forthright New Yorker manages to infiltrate the lives and hearts of the staff of a rather more formal and restrained English antiquarian bookshop. It begins with a letter in October 1949 from (Miss) Helene Hanff of East 95th Street, New York City to Messrs Marks & Co. at 84 Charing Cross Road, London, announcing that she is a “poor writer with an 

Join our subscription club Have Oh Comely delivered to your door, six times a year. Even better, you’ll save money and get your copy earlier than in shops.

Pay just £12 every three issues/six months. Or buy a whole year for £25. To see all our offers for UK and overseas subscriptions, visit icebergpress.co.uk/subscribe. Or call 020 7415 7238 – we are a small team, so at times you may get through to our answerphone. Leave us a message and we’ll call you back.

Terms and conditions: this offer is for new UK print subscribers only, check online for overseas prices. You will receive six issues in a year. Prices correct at time of going to print and subject to change. For full terms and conditions please visit icebergpress.co.uk/tandc.

“To Casey and Jennifer, Someone got in contact with me because they felt you both needed to be reminded of how absolutely wonderful you are…” “To Aimee, You sound like you are such a talented little lady, never be fearful of where that talent, that power and passion may lead you…” “To Ruth, This is just a little note to remind you that you are enough, exactly as you are…”

Adi-hack dress: Jodi’s own, from The People Shop, Birmingham

One inspirational letter can change your life forever. Three years ago, while bed-bound with meningoencephalitis, Jodi Ann Bickley was in the depths of a dark depression. She imagined the lives of others suffering unfair blows in life and thought: “If I’m feeling this awful, someone else out there probably needs a hand out of their hole, too.” That night, she built a simple website and sent a series of tweets out into the world. “I’m going to write you a letter,” it started. “A letter just to make the day a bit better or to remind you of the bloody amazing stuff about you that you’ve forgotten.” “Because we all forget once in a while.” Two hundred strangers responded, overnight, requesting Jodi write to them. So she did. “I think everyone deserves to know  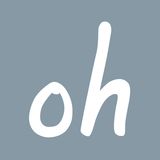 Lick the envelope. Cross your t's and join the dots, scribble and splash outside the lines. Post a pick-me-up through a stranger's door, see...

Lick the envelope. Cross your t's and join the dots, scribble and splash outside the lines. Post a pick-me-up through a stranger's door, see...