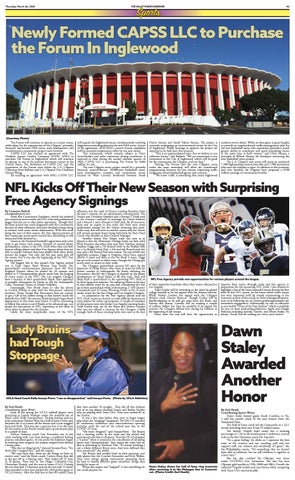 Newly Formed CAPSS LLC to Purchase the Forum In Inglewood

The Forum will continue to operate as a music venue, while plans for the construction of the Clippers’ privatelyfinanced, fan-focused NBA arena, team headquarters and transformative community project move forward CAPSS LLC has reached an agreement with The Madison Square Garden Company (NYSE: MSG) to purchase The Forum in Inglewood, which will continue to operate as one of the premier live-music venues in the United States. The formation of CAPSS LLC and the acquisition of the Forum were driven by L.A. Clippers Chairman Steve Ballmer and L.A. Clippers Vice Chairman Dennis Wong. By reaching an agreement with MSG, CAPSS LLC

will acquire the Inglewood venue, simultaneously resolving litigation surrounding plans for the new NBA arena. As part of the agreement, all of MSG’s current Forum employees will be extended employment offers by the new owner. This transaction, which remains subject to HartScott-Rodino and other customary closing conditions, is expected to close during the second calendar quarter of 2020. CAPSS LLC is purchasing The Forum for $400 million in cash. The new Clippers arena project would be a privately financed, state-of-the-art, 18,000-seat basketball arena, team headquarters complex and community center located on West Century Boulevard between South

Prairie Avenue and South Yukon Avenue. The project is currently undergoing an environmental review by the City of Inglewood. Public hearings to approve the project are expected to be held later this summer. “This is an unprecedented time, but we believe in our collective future,” said Ballmer. “We are committed to our investment in the City of Inglewood, which will be good for the community, the Clippers, and our fans.” Having The Forum and the new Clippers arena under the same ownership will allow for coordinated programming between the two venues, improving traffic congestion around basketball games and concerts. “We know traffic is something that many Inglewood

residents worry about. While we have gone to great lengths to provide an unprecedented traffic-management plan for the new basketball arena, this acquisition provides a much greater ability to coordinate and avoid scheduling events at the same time at both venues,” said Chris Meany, a principal of Wilson Meany, the developer overseeing the new basketball arena project. The L.A. Clippers’ new arena will create an estimated 7,500 high-paying construction jobs and 1,500 permanent jobs once the complex is open. In addition to the economic and civic benefits, the Clippers have proposed a $100 million package of community benefits.

NFL Kicks Off Their New Season with Surprising Free Agency Signings By Cameron Buford whatsgoodinsports.com Amid this Coronavirus Pandemic, which has infested our country in recent weeks, the NFL is the only professional league that has yet to shut down operations. Though they did have at least one coach diagnosed with the Coronavirus because it’s their offseason, they have decided to keep doing as normal, with some minor adjustments. With this week being the start of their season, the Free Agency portion of their season got many sports starved fans something to talk about and look forward to. Teams in the National Football League have only a few ways to get better each season. Outside of natural player development, trades, or the NFL Draft when they can draft former college players and then Free Agency where they are able to acquire veterans that have played with other teams around the league. Not only did this past week kick off the season, but it was also the beginning of the NFL Free Agency period. The biggest fish in this season’s Free Agency period was 6 Time Super Bowl Winner Tom Brady. The quarterback’s unceremonious departure from the New England Patriots where he played for 20 seasons and played in 9 Championships games made him the longing of many teams in the NFL. The Los Angeles Chargers have a vacancy in their quarterback depth chart appeared to possible destination for Brady, as did the Indianapolis Colts, Tennessee Titians or Miami Dolphins. Surprisingly, Tom Brady chose to take his talents to Central Florida to play with the Buccaneers’ talented receivers. Those Tampa Bay Buccaneers fans are ecstatic to get a QB of his caliber seeing as they haven’t made the playoffs since 2007. By contrast, Brady has had 6 Super Bowl appearances in that same time frame. It will be interesting to follow this union to see if Brady, at his advanced age, can propel the Buccaneers to NFC supremacy as he’s done so often when he played for the Patriots. Likely the most inexplicable move of the NFL

offseason was the trade of Texans Leading Receiver, from the past 5 seasons, for an injury-prone running back. The Texans sent DeAndre Hopkins and a Round 2 Draft pick to the Arizona Cardinals in exchange for David Johnson and a Round 2 and a Round 4 Draft pick. By all accounts, there was no equity in this trade and there were some undisclosed reasons for the Texans initiating this trade. Either way, this will serve as another reason why the Texans will remain perineal losers being held back by their Head Coach who doubles as their General Manager. Another reason that Texans trade was seen as so absurd is that the Minnesota Vikings broke up their solid Wide Receiver duo when they sent their 5th-year wideout Stephon Diggs and a 7th Round Draft to the Buffalo Bills for a 1st Round Draft Pick, a 5th and 6th Round pick this year and a 4th Round Pick next season. No one would ever rightfully compare Diggs to Hopkins, who’s been named All-Pro 4 times and been to the Pro Bowl 3 times. Diggs has yet to be named to either team, though the Vikings got much more in return in their trade. The Chargers quarterback vacancy left open by the departure of Philip Rivers, who chose to team up with his former coaches in Indianapolis. By Brady choosing the Buccaneers, this left the Chargers to depend on the player development of Tyrod Taylor to fill that void. They will likely draft a quarterback in the upcoming NFL draft to be their long-term solution. Yet replacing Rivers as the face of that offense won’t be an easy task considering he’s line up as their quarterback while orchestrating 27 4th Quarter Comebacks and 32 Game Winning Drives in his 14 years under center for the San Diego and Los Angeles Chargers. In preparation for the Free Agency period and the NFL Draft, teams are forced to make difficult decisions on some players for salary cap purposes. A couple of casualties of this process were two former Los Angeles running backs, Todd Gurley who cut by the Rams and Melvin Gordon who was not offered a contract by the Chargers. Oddly enough, both of these running backs were seen as the face

of their respective franchises when their teams relocated to Los Angeles. Todd Gurley will be returning to the town he played college football as he has signed with the Atlanta Falcons. While Melvin Gordon has signed with the Chargers division rivals Denver Broncos. Though Gurley will be double-dipping as he will get paid from the Rams and Falcons this season, Gordon will be making a couple of million dollars less than he would’ve if he signed the contract the Chargers offered him during his holdout at the beginning of last season. Every team has and will have the opportunity to

By Earl Heath Contributing Sports Writer Early in the spring the UCLA softball players were practicing at Easton Stadium under the watchful eye of Head coach Kelly Inouye-Perez. During batting practice team newcomer Delanie Wisz hit a ball so hard it went and knocked the A in Easton off the fixture and it just waggled back and forth. That was just a practice but it set the tone for the season as the Bruins would open up pre-season play in a couple of days.     Veteran Assistant coach Lisa Fernandez was in the circle working with Lexi Sosa during a combined batting practice simulated game. At one point the freshman began to wind-up then stopped, the umpire stepped from behind a home plate.  “Was that an illegal pitch,” shouted Inouye-Perez. “Yes that’s why I stepped out,” said the umpire. “We can’t have that, those are the things we have to correct now.” said the Bruin coach. Correct them they did as the got off to a blazing start. They reeled off 25 wins in 26 games. They won in San Diego, Cathedral City, Clearwater Florida, and the won at home (12-1). During the run they had 13 shutouts won by the run rule 12 times. Also included in that Sosa pitched the 18th perfect game in UCLA history.  After the only loss to then #3 ranked Texas

they won another 10 straight.  They did all this without two of its top players Rachael Garcia and Bubba Nickles who are playing with Team USA. They were ranked #2 in the Nation. It was a few days before they were to begin league play when the “stoppage” happened. The PAC-12 canceled all conference conference and non-conference sporting activities until the end of the school year due to the COVID 19 virus. “My heart dropped,” said Inouye-Perez.  The Bruins had a meeting earlier in the week and the school had announced a fan ban in all sports. Then the NCAA dropped a “nuclear” when it announce the cancellation of all spring sports and Championships. That means the team had no shot at defending its National Title. “It’s dream breaking I saw a whole different Bruin team, they were deflated they were emotional,” she added. The Bruins had worked hard in their practices, not only players but the Coaches Fernandez and Kirk Walker. They were always giving  instructions preparing them for how to handle different  game situations, things they should be aware of. When this season was “stopped” it was something no one could prepare for.

improve their teams through trade and free agency in preparation for the upcoming NFL Draft. I just wanted to highlight a few of the most impactful moves during the first week of this NFL season, let me know which roster moves you were impressed with by simply commenting in the comment section of this article on www.whatsgoodinsports. com or by following me on Twitter @whatsgoodnsport for immediate engagement. Additionally, be sure to subscribe to our weekly “Voice of the Fans Podcast” which is available for you on most podcasting platforms, Apple and Google Podcasts including Spotify, TuneIn, and iHeart Radio. As always, Thank You for making our voice, your choice!

Dawn Staley shows her hall of fame ring moments after receiving it at the Mohegan Sun in Connecticut. (Photo Credit: Earl Heath)

By Earl Heath Contributing Sports Writer Dawn Staley helped guide South Carolina to No. 1 and has earned coach of the year honors from the Associated Press. The Hall of Fame coach led the Gamecocks to a 32-1 record including wins over 8 top 25 ranked teams. The former Temple head coach has a winning percentage of .726 in the Southeastern Conference, second only to the late Tennessee coach Pat Summitt. “It’s a great feeling. It’s cliche as I represent the best team in the country and our coaching staff and our support staff, our trainers and everybody. It’s great,” she the Philadelphia native. “It’s something that we haven’t been able to celebrate, but we will celebrate it together at a later time.” She has also coached the Olympic two times under  UCONN’s Geo Auriemma. She also has  won Olympic gold medals in 1996, 2000 and 2004. Overall, she collected 10 gold medals and one bronze while competing with Team USA internationally.