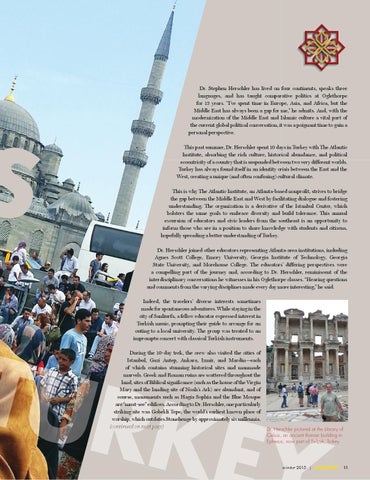 Dr. Stephen Herschler has lived on four continents, speaks three languages, and has taught comparative politics at Oglethorpe for 12 years. “I’ve spent time in Europe, Asia, and Africa, but the Middle East has always been a gap for me,” he admits. And, with the modernization of the Middle East and Islamic culture a vital part of the current global political conversation, it was a poignant time to gain a personal perspective. This past summer, Dr. Herschler spent 10 days in Turkey with The Atlantic Institute, absorbing the rich culture, historical abundance, and political eccentricity of a country that is suspended between two very different worlds. Turkey has always found itself in an identity crisis between the East and the West, creating a unique (and often confusing) cultural climate. This is why The Atlantic Institute, an Atlanta-based nonprofit, strives to bridge the gap between the Middle East and West by facilitating dialogue and fostering understanding. The organization is a derivative of the Istanbul Center, which bolsters the same goals to embrace diversity and build tolerance. This annual excursion of educators and civic leaders from the southeast is an opportunity to inform those who are in a position to share knowledge with students and citizens, hopefully spreading a better understanding of Turkey. Dr. Herschler joined other educators representing Atlanta-area institutions, including Agnes Scott College, Emory University, Georgia Institute of Technology, Georgia State University, and Morehouse College. The educators’ differing perspectives were a compelling part of the journey and, according to Dr. Herschler, reminiscent of the interdisciplinary conversations he witnesses in his Oglethorpe classes. “Hearing questions and comments from the varying disciplines made every day more interesting,” he said. Indeed, the travelers’ diverse interests sometimes made for spontaneous adventures. While staying in the city of Sanliurfa, a fellow educator expressed interest in Turkish music, prompting their guide to arrange for an outing to a local university. The group was treated to an impromptu concert with classical Turkish instruments.

During the 10-day trek, the crew also visited the cities of Istanbul, Gazi Antep, Ankara, Izmir, and Mardin—each of which contains stunning historical sites and manmade marvels. Greek and Roman ruins are scattered throughout the land, sites of Biblical significance (such as the house of the Virgin Mary and the landing site of Noah’s Ark) are abundant, and of course, monuments such as Hagia Sophia and the Blue Mosque are “must-see” edifices. According to Dr. Herschler, one particularly striking site was Gobekli Tepe, the world’s earliest known place of worship, which outdates Stonehenge by approximately six millennia. (continued on next page)

Dr. Herschler pictured at the Library of Celsus, an ancient Roman building in Ephesus, now part of Selçuk, Turkey. 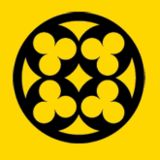 This issue celebrates the 100th anniversary of the refounding of Oglethorpe University's campus on Peachtree Road in Atlanta, Georgia.

This issue celebrates the 100th anniversary of the refounding of Oglethorpe University's campus on Peachtree Road in Atlanta, Georgia.