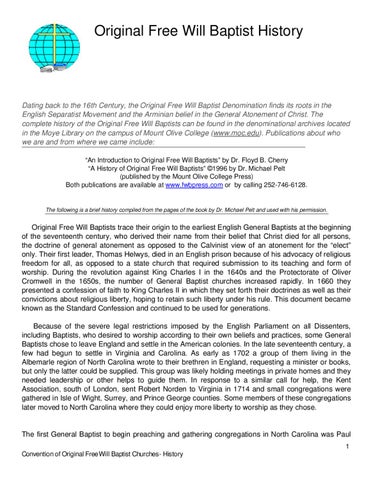 The following is a brief history compiled from the pages of the book by Dr. Michael Pelt and used with his permission.

Original Free Will Baptists trace their origin to the earliest English General Baptists at the beginning  of the seventeenth century, who derived their name from their belief that Christ died for all persons,   the doctrine of general atonement as opposed to the Calvinist view of an atonement for the “elect”   only. Their first leader, Thomas Helwys, died in an English prison because of his advocacy of religious   freedom for all, as opposed to a state church that required submission to its teaching and form of  worship.  During  the   revolution  against  King  Charles I  in   the   1640s and   the   Protectorate  of Oliver  Cromwell   in   the   1650s,   the   number   of   General   Baptist   churches   increased   rapidly.   In   1660   they  presented a confession of faith to King Charles II in which they set forth their doctrines as well as their  convictions about religious liberty, hoping to retain such liberty under his rule. This document became   known as the Standard Confession and continued to be used for generations.         Because   of  the   severe   legal   restrictions  imposed   by  the   English   Parliament  on   all   Dissenters,   including Baptists, who desired to worship according to their own beliefs and practices, some General   Baptists chose to leave England and settle in the American colonies. In the late seventeenth century, a  few  had  begun  to  settle   in  Virginia  and   Carolina. As  early as 1702  a   group  of them living  in  the   Albemarle region of North Carolina wrote to their brethren in England, requesting a minister or books,   but only the latter could be supplied. This group was likely holding meetings in private homes and they   needed   leadership   or   other   helps   to   guide   them.   In   response   to   a   similar   call   for   help,   the   Kent  Association, south of London, sent Robert Norden to Virginia in 1714 and small congregations were  gathered in Isle of Wight, Surrey, and Prince George counties. Some members of these congregations  later moved to North Carolina where they could enjoy more liberty to worship as they chose.         The first General Baptist to begin preaching and gathering congregations in North Carolina was Paul  1 Convention of Original Free Will Baptist Churches - History

Palmer, who came from Virginia and was soon afterward married to Johanna Peterson, the widow of a   prominent citizen of Chowan Precinct and the stepdaughter of Benjamin Laker. Laker’s family was  among those General Baptists who had emigrated from England to Carolina in 1684. Palmer became   a General Baptist and was soon proclaiming his newfound faith and is reported to have “settled” the  first   Baptist   church   in   North   Carolina   in   Chowan   Precinct   north   of   Edenton   in   1727.   A   second  congregation was formed in neighboring Pasquotank Precinct in the home of William Burges, who  became its first pastor. During the next several years, Palmer traveled throughout the coastal areas of  North  Carolina,  making  converts and  establishing  preaching  points  where  leaders were  chosen  to  become pastors of new congregations. Other men who would join him in this effort were Josiah Hart,   William Fulsher, William Surginer, and a number of younger men who were converted and later called  into this ministry. By 1755 there were as many as twenty General Baptist churches scattered across   the coastal plain. Palmer himself died as early as 1743, followed by William Surginer in 1750. During  this time a yearly meeting of these churches was held for the purpose of providing inspiration and  mutual support to its ministers and member churches.         In 1754, the Philadelphia Baptist Association (Particular Baptist) sent Reverend John Gano on a   mission to the Carolinas. On his return, he reported on his encounter with the General Baptists and   alleged   that   many   of   their   ministers   and   church   members   were   baptized   without   having   had   “an  experience of grace.” The Philadelphia Association then sent two of their ablest ministers to visit these   churches and to conduct examinations of individual members to determine who could give satisfactory  evidence that they were among God’s “elect,” and therefore eligible for membership in the church. The  churches were then reconstituted as Particular Baptist churches with only the “elect” as members. In  four churches that were reorganized by the ministers only about five percent of the original members  were included. Other churches were soon reorganized in like manner by their pastors who had already  embraced the Calvinist doctrines. Only four or five churches and their pastors refused to submit to this   procedure   and   remained   true   to   their   General   Baptist   heritage.   Among   the   pastors   the   names   of   Joseph Parker, William Parker, William Fulsher, and John Winfield are found in Morgan Edwards’  account of these events. For a half­century these General Baptist churches made little progress but  somehow managed to keep the faith, struggling against poverty, isolation, lack of education, and the  disaffection of their Baptist neighbors.        In the early decades of the nineteenth century, these churches began to show evidence of new life  with a revision of their articles of faith in 1812 and a steady increase of churches and new members.  Their growth was a small part of what is termed the Second Great Awakening in America that occurred  during   that   period.   About   1828   they   were   bold   enough   to   formally   adopt   the   name,   which   their  detractors had used to identify them — Free Will Baptists. By 1830 their conference was large enough   to divide into two conferences, Bethel and Shiloh. The following year action was taken to organize a  conference in South Carolina. Among several active ministers of this period, the name of Jesse Heath  stands out. His leadership was vital in helping Free Will Baptists to learn about other faith groups  beyond North Carolina and inspiring them to carry the gospel to their neighbors.        During the 1830s, the influence of Thomas Campbell, who visited North Carolina in 1834 in order to   promote his “Restoration Movement,” began to have a disruptive impact on some Free Will Baptist  pastors and churches, especially in the Bethel Conference. This resulted in the defection of several   ministers and the division of a number of churches. Campbell’s views were directed against the use of  denominational names and the use of creeds and articles of faith on the grounds that the Scriptures  2 Convention of Original Free Will Baptist Churches - History

alone could unite the churches and restore Christianity to its primitive form. In 1842, a conference   embracing Free Will Baptist beliefs and practices and consisting of churches from both Bethel and   Shiloh was convened, which became known as the General Conference of Original Free Will Baptists.  Churches of this conference continued to prosper, benefiting greatly from revivals during that period,   and   thereby   passing   on  their  heritage   to   future   generations.   This  was   also   a   period   of   increased   migration from North Carolina to other states across the South, resulting in the planting of Free Will   Baptist churches over a wider area.        As the number of churches increased throughout much of North Carolina, new conferences were  formed. The Cape Fear Conference was organized in 1855 with eight churches and seven ministers  and the Pee Dee Association in the southern part of the state held its first meeting in 1869. Between   1853 and 1886, the General Conference experienced phenomenal growth with an enrollment of 118   churches in 1886, spread out over an area extending eastward as far as Tyrrell County and westward   as far as Wake and Chatham counties. Two of the most outstanding ministers of this period were   James Moore and Rufus K. Hearn. Moore was licensed by his local church in 1825 and ordained in   1827; he was a faithful pastor and leader in the conference for 53 years. Hearn was ordained in 1853   and served as clerk of the General Conference for many years and later as an editor of The Free Will   Baptist, the   denominational   paper   that   was   first   published   in   1873.   He   was   also   the   author   of   “A   History   of   Free   Will   Baptists   in   North   Carolina,”   the   first   known   attempt   to   write   a   history   of   the   denomination.        Because of the great distances involved in travel for ministers and delegates to attend the General   Conference and the difficulty of accommodating the large crowds, the conference in session in 1886  agreed to form the Western and Eastern divisions with the Wilmington and Weldon Railroad as the   dividing line. As these conferences continued to grow, the Eastern division in 1895 agreed to a further   division in order to form the Central and the Eastern conferences. The number of new churches added   to all the conferences in the latter half of the nineteenth century exceeded that of any other like period   in   the   history   of   the   denomination.   At   the   end   of   the   nineteenth   century   there   were   several   conferences, but as yet no effective organization to unite them for the purpose of achieving larger   goals   and   mission   of   the   denomination   as   a   whole.   After   the   failure   of   the   Union   Conference,  organized in 1892, to accomplish that purpose, leaders of the Union Conference in 1912 proposed to   form a convention in hopes of including other organized groups of Free Will Baptists located in the  southern and western regions of North Carolina.        Ministers and delegates from churches belonging to four conferences met at Bailey, North Carolina,  in 1913 to adopt the constitution and by­laws of the new Convention and to consider other items of   business.   One   of   these   was   the   adoption   of   an   earlier   proposal   to   establish   a   Free   Will   Baptist   Orphanage. Steps were taken to amend the charter of the Free Will Baptist Publishing Company,  which had been established at Ayden, to allow for a wider ownership of that enterprise. There was  also a resolution calling on the churches to make gifts to their conferences designated for Ayden   Seminary, a school that had opened in 1898. This institution was the first successful attempt to offer  an educational program for Free Will Baptists. Following a building program on a new campus in   Ayden, it became known as Eureka College in 1925 but was forced to close its doors in 1929 due to  financial insolvency.         After   an   earlier   attempt   at   the   turn   of   the   century   had   failed,   the   desire   to   form   a   General   3 Convention of Original Free Will Baptist Churches - History

Conference of Free Will Baptists across the South was finally achieved in 1921. This organization met  annually until 1938. Meanwhile, in the early 1930s, efforts were made to bring together the General  Conference in the South and the Cooperative General Association in the Midwest to form a national  organization to be known as the National Association of Free Will Baptists, which was achieved in   1935. About two decades later, conflicts arose between Original Free Will Baptists in North Carolina  and the national body. Representatives of the national body took issue with the Free Will Baptist Press   over the publication of literature for the denomination. Some alumni of the National Association’s Bible  College   were   antagonistic   toward   Mount   Olive   College,   a   liberal   arts   college   sponsored   by   the  Convention. Finally, a controversy over church policy arose when a minister refused to accept the  discipline of the Western Conference of which he was a member and the National Association sought  to intervene on his behalf in the civil case that resulted from the dispute. Serious tensions developed  from these issues, resulting in a decision in 1962 by the Convention of Original Free Will Baptists to   withdraw from the National Association.        During the past century the Convention of Original Free Will Baptists has developed and  maintained its own denominational program, including a publishing foundation, a children’s home, a  retreat center, a liberal arts college, home and foreign missions, and other ministries. At the beginning  of the twenty­first century the Convention, together with its member conferences and local churches, is  in the best position ever to carry out the mission and purpose for which it was brought into being.  Persons joining any one of the local churches should become better acquainted with the heritage and  faith of this denomination so that they can identify with it and participate in its efforts to make Christ  known to the world.