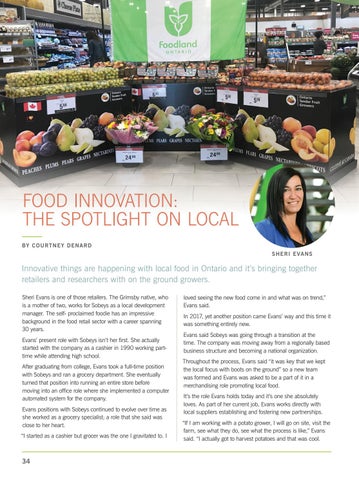 Innovative things are happening with local food in Ontario and it’s bringing together retailers and researchers with on the ground growers. Sheri Evans is one of those retailers. The Grimsby native, who is a mother of two, works for Sobeys as a local development manager. The self- proclaimed foodie has an impressive background in the food retail sector with a career spanning 30 years. Evans’ present role with Sobeys isn’t her first. She actually started with the company as a cashier in 1990 working parttime while attending high school. After graduating from college, Evans took a full-time position with Sobeys and ran a grocery department. She eventually turned that position into running an entire store before moving into an office role where she implemented a computer automated system for the company. Evans positions with Sobeys continued to evolve over time as she worked as a grocery specialist; a role that she said was close to her heart. “I started as a cashier but grocer was the one I gravitated to. I

loved seeing the new food come in and what was on trend,” Evans said. In 2017, yet another position came Evans’ way and this time it was something entirely new. Evans said Sobeys was going through a transition at the time. The company was moving away from a regionally based business structure and becoming a national organization. Throughout the process, Evans said “it was key that we kept the local focus with boots on the ground” so a new team was formed and Evans was asked to be a part of it in a merchandising role promoting local food. It’s the role Evans holds today and it’s one she absolutely loves. As part of her current job, Evans works directly with local suppliers establishing and fostering new partnerships. “If I am working with a potato grower, I will go on site, visit the farm, see what they do, see what the process is like,” Evans said. “I actually got to harvest potatoes and that was cool. 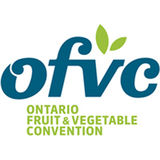 The official show guide of the Ontario Fruit and Vegetable Convention held annually in February.

The official show guide of the Ontario Fruit and Vegetable Convention held annually in February.