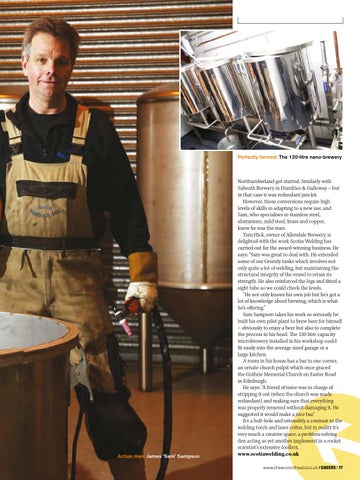 Northumberland got started. Similarly with Sulwath Brewery in Dumfries &amp; Galloway – but in that case it was redundant jam kit. However, those conversions require high levels of skills in adapting to a new use, and Sam, who specialises in stainless steel, aluminium, mild steel, brass and copper, knew he was the man. Tom Hick, owner of Allendale Brewery, is delighted with the work Scotia Welding has carried out for the award-winning business. He says: “Sam was great to deal with. He extended some of our Grundy tanks which involves not only quite a lot of welding, but maintaining the structural integrity of the vessel to retain its strength. He also reinforced the legs and fitted a sight tube so we could check the levels. “He not only knows his own job but he’s got a lot of knowledge about brewing, which is what he’s offering.” Sam Sampson takes his work so seriously he built his own pilot plant to brew beer for himself – obviously to enjoy a beer but also to complete the process in his head. The 120-litre capacity microbrewery installed in his workshop could fit easily into the average sized garage or a large kitchen. A room in his house has a bar in one corner, an ornate church pulpit which once graced the Guthrie Memorial Church on Easter Road in Edinburgh. He says: “A friend of mine was in charge of stripping it out (when the church was made redundant) and making sure that everything was properly removed without damaging it. He suggested it would make a nice bar.” It’s a bolt-hole and ostensibly a contrast to the welding torch and laser cutter, but in reality it’s very much a creative space, a problem-solving den acting as yet another implement in a rocket scientist’s extensive toolbox. www.scotiawelding.co.uk www.cheersnortheast.co.uk / CHEERS / 17 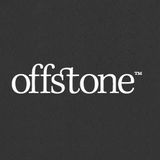