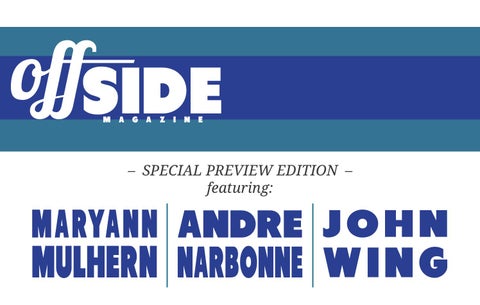 offSIDE is delighted to feature previews of three new releases from Black Moss Press in this exciting ‘First Look’ edition. Coming in April 2016, with participation of students at the University of Windsor, the press is set to release two new poetry titles from Mary Ann Mulhern and comedian John Wing, as well as an all new short fiction collection from Andre Narbonne; there are exclusive glimpses at all three in these pages. Mulhern returns with “How We Fare” - poems written in her stark, halting style and hewn from the stories in the daily news cycle that have shocked and compelled us over the last many years. Her poems represent a refreshed approach and a reimagining to many of the most important stories of our moment in time. Funnyman John Wing brings not only his signature wit (which has taken him

FIBRES FROM THE PRISON TAILOR SHOP

MADE WITH SUPPORT FROM:

inward with the new poems in “I’ll Be There Soon”. Recalling a youth of class clownism and a life spent chasing personal and professional bliss, Wing continues to bring the humour and deceptive depth of feeling that he is so known for. Narbonne’s sea-faring background as a marine engineer breathes life into the standalone stories that make up his novel, “Twelve Miles to Midnight”. Already drawing comparisons to the sea tales of Conrad, Narbonne’s newest stories are at once frank and solemn, yet entrance the reader with vivid PUBLISHER prose and a palpable humanity. Marty Gervais

We are proud to present three unique voices in Canadian literature and hope that you enjoy this promising look at these exciting new volumes coming soon from Black Moss Press! - Brad Smith, managing editor.

John B. Lee “From the boy with his first dog leaping his lap to lick his face... to the old man walking his fifth dog on the beach, this life journey illuminates how we see the world from first days until the seventh morning.”

Black Moss Press presents new collections from acclaimed  writers  John B. Lee  and Don Gutteridge. THE FULL MEASURE and TIDINGS are proudly offered on the 64/10 line - ideal gifts for avid  readers and available now in stores and online.

TIDINGS Don Gutteridge The prolific Gutteridge returns with a melange of snapshots from the colourful village of his youth and meditations on his life in writing.

HALF THE BATTLE After supper on Saturday, Derek goes to the rec centre to find François in conversation with a new boy, who looks impossibly big. His dark brown hair is unkempt. His jean jacket is stuck with cattail fluff. “Have you met Geoff?” François asks. “Hi.” He nods. “Derek.” “You’re the teacher’s kid. I know. How do you fucking do?” “Ah…I’m okay. How are you?” “Peachy keen.” He spits. There is a long silence. Geoff ’s eyes never leave Derek. Cars drift by and the gravel crackles like popcorn under their tires. Geoff steps forward suddenly and raises his arm to his forehead and Derek flinches. Geoff smiles and leans back against the rec centre wall. No-one speaks. It’s as though the very air is oppressive. He is there again the next night. He doesn’t speak unless spoken to and then with a menacing brevity that relies on obscenities for punctuation. For a moment Derek feels that it’s just Geoff ’s manner, that he means no harm, but Geoff, perhaps catching on to Derek’s confidence, tries the same trick again of lifting his arm suddenly to scratch his head. He smiles when Derek flinches and the conversation ends. They meet again the next morning and Derek does not flinch. Instead, the two boys stare into each other’s eyes for too, too long. François watches, deep in thought. ––

THE ADVANCEMENTS I met the day man on the engine room stairs as I went down to stand the twelve-to-four. He was the greybeard on our staff, a thirty-year-old from Cape Breton whose body didn’t seem to know that it was young. As if in acknowledgement of his Methuselah status in the engine room, his face was weathered and his spine was bent. His eyes had an unattractive look of preparation, as though he were always preparing for the worst and formulating the necessary words to stave it off. He’d been nicknamed “Gandalf ” by my oiler. “He’s not just some drooling deadbeat who talks to himself because no-one else will listen,” the oiler assured me. “He’s working on spells.” On the stairs the day man greeted me with his usual salutation. “Any news?” “The wheelsman on the icebreaker is missing.” That didn’t seem to surprise him. He shrugged and said: “How long?” “Has he been missing? They’re not sure. When the watchman called him for the morning shift, he wasn’t in his cabin. They’ve been searching their ship.” “How do you know?” “They called Philpot to see if he’s here. You don’t think he’s walked ashore?” A cruel irony of our present circumstance was that it was certainly possible given the thickness of the ice. The day man rubbed his chin, perused the catalogue of his experience and  said: “No, he’s dead.” Then he walked up the engine room stairs. ––

THE LAST EMPTY CHAIR “No,” the second echoed, “it’s not much.” Then he spat over the rail at something crawling on the dock below and said, “It’s everything.” Despite his youth, Derek knew what the second meant. He’d once seen an old man sitting by himself at a table in a bar in Montréal. As the afternoon wore on, bit-bybit, the bar filled up with a young crowd. Periodically, people would come up to the man’s table and ask for one of his empty chairs. He always relinquished it. Always smiled. Until he was left with one single empty chair at a large table. That was it. When the last twenty-year old the man would talk to that night came up and asked for his final chair Derek felt a rage inside. Now there was not even the hope of companionship. The old man sitting by himself at a hopeless table finished his beer and left. Derek felt certain that every person deserves one empty chair. The Douglas Canada, he understood from the second’s conversation, was Legault’s last empty chair. ––

Follow the group editing ‘ Twelve Miles to Midnight’ at fb.com/twelvemilestomidnight

FLOWER OF FREEDOM His flower of freedom needs Twentythree years, darkness, Roots alive with suffering Limestone dust, limestone walls Enough to blind the sun Mandela believes There will be blooms Seeds for generations Brilliant showers of light A rainbow.

FIBRES FROM THE PRISON TAILOR SHOP Secrets wrap around my spindle Smooth and tight, enough for fabrics of freedom A prisoner branded with murder Threads his needle with silk Day after day, I teach him an ancient trade Pattern, cut, binding, dart and seam His hands slide over cotton, linen, wool Creases of flesh My naked body in his midnight cell He whispers his plan How he’ll loosen shackles of my marriage Carry me to islands Where rainbows gather jewels Stolen from the sea. June 7, 2015 • CNN

AT WHAT PRICE a toothless Roma mother dresses her children in gaudy rags sells a baby girl maybe the child will have food, clothes, books safe shelter of care maybe not most of us wander into marketplaces schools, partners, jobs streets of what can happen who knows the price how we fare

SELECTIVE MEMORY Selective memory is what people call it. Psychiatrists like the phrase. But memory isnâ&#x20AC;&#x2122;t selective. What the doctors are talking about is lying.

Sometimes memory selects, but not to give you a choice. Something happens and thereâ&#x20AC;&#x2122;s a line, an image, something sticky that adheres to the bank wall and stays with you until death, like a barnacle.

THE SWIMMERS Meeting friends who have survived, beaten back illness with gamma lasers and plastic parts. Pushing sixty, we walk slower because the cart is heavy with responsibilities and guilt-bricks. But we are also new, having jumped into the river all those days ago, allowing the current to wash us up here tonight on this restaurant shore. When our parents were this age, they were ancient, doddering, not even trying to keep up. Weâ&#x20AC;&#x2122;ve kept our youth, cobbled from graft and implant, cap and trade-off, and the occasional performance-enhancer. As the restaurant closes, weâ&#x20AC;&#x2122;re flushed with recalled strength, smiling in three different directions, snug by a fire we built a thousand short years ago.

CIRCUS PEOPLE The girl is pretty, nice legs shown off in a mini-loincloth and dancer’s shoes. She goes out into the light carrying three hula hoops, and kicks them, one by one, into a spin on her body as music plays. The first one to her knees, then she gyrates and it rises to her waist, at which point she kicks another one to the knee position, lifts both of them at once, oddly thrilling, waist to armpits, knees to waist, and finally a third kick and she has three going round her in many tight circles. We all do something for a living. In early school it’s brought up and each child makes a public prediction. Some, confident in firm belief of future achievement, say doctor, and many of those little shits actually do become doctors. Some are shy to say something so momentous, so final-sounding and have to be prompted, “A lawyer, like your father?” Others make obvious jokes: chewing gum taster, lingerie salesman. But no one ever says ‘insurance adjustor’ and I didn’t say ‘comedian.’ I asked the hula hoop girl, whose act lasted four and a half solid minutes, what she foretold on that morning in front of the whole class. She said she was an eighth generation circus performer. Her mother walked the wire. Did she know? Did she say in a clear voice audible to everyone, “Acrobat?” “Trapeze artist?” Was she home-schooled under a big top, instructed in the contortive arts by Dad or Mom? Her future was predestined. She learned very young to grow a beard. I knew what I wanted then. I wanted to be famous, and this was back when it was very hard to achieve. I didn’t say it, because it wasn’t a job; it produced nothing of real value. Still, the idea burned brightly within. But I didn’t want to be laughed at, or rebuked by the teacher, who resembled a female prison guard, and would certainly tell my parents how foolish I was at the next conference. What are you going to do, Mr. Wing? she would have asked, run off and join the circus?

“Sidelines” and “Learning to Settle Down” are both available now at many fine bookstores or online at blackmosspress.com & Amazon

--For the joint release of books by authors Peter Hrastovec and Chad Norman, Black Moss celebrated with a launch in early October at Atelier Virginianne in Windsor. Hrastovec and Norman each read from their new collections – “Sidelines” and “Learning to Settle Down”. The event also included appearances by poets Mary Ann Mulhern, Vanessa Shields, and Marty Gervais.

Check out video of this reading (and more!) at blackmosspress.com