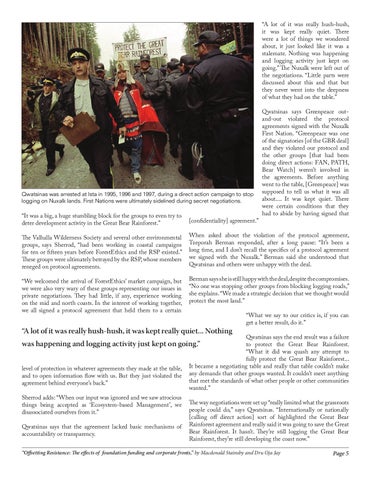 “A lot of it was really hush-hush, it was kept really quiet. There were a lot of things we wondered about, it just looked like it was a stalemate. Nothing was happening and logging activity just kept on going.” The Nuxalk were left out of the negotiations. “Little parts were discussed about this and that but they never went into the deepness of what they had on the table.”

Qwatsinas was arrested at Ista in 1995, 1996 and 1997, during a direct action campaign to stop logging on Nuxalk lands. First Nations were ultimately sidelined during secret negotiations.

Qwatsinas says Greenpeace outand-out violated the protocol agreements signed with the Nuxalk First Nation. “Greenpeace was one of the signatories [of the GBR deal] and they violated our protocol and the other groups [that had been doing direct actions: FAN, PATH, Bear Watch] weren’t involved in the agreements. Before anything went to the table, [Greenpeace] was supposed to tell us what it was all about.... It was kept quiet. There were certain conditions that they had to abide by having signed that

“It was a big, a huge stumbling block for the groups to even try to deter development activity in the Great Bear Rainforest.”

The Valhalla Wilderness Society and several other environmental groups, says Sherrod, “had been working in coastal campaigns for ten or fifteen years before ForestEthics and the RSP existed.” These groups were ultimately betrayed by the RSP, whose members reneged on protocol agreements.

When asked about the violation of the protocol agreement, Tzeporah Berman responded, after a long pause: “It’s been a long time, and I don’t recall the specifics of a protocol agreement we signed with the Nuxalk.” Berman said she understood that Qwatsinas and others were unhappy with the deal.

“We welcomed the arrival of ForestEthics’ market campaign, but we were also very wary of these groups representing our issues in private negotiations. They had little, if any, experience working on the mid and north coasts. In the interest of working together, we all signed a protocol agreement that held them to a certain

Berman says she is still happy with the deal, despite the compromises. “No one was stopping other groups from blocking logging roads,” she explains. “We made a strategic decision that we thought would protect the most land.”

“A lot of it was really hush-hush, it was kept really quiet... Nothing

“What we say to our critics is, if you can get a better result, do it.”

was happening and logging activity just kept on going.” level of protection in whatever agreements they made at the table, and to open information flow with us. But they just violated the agreement behind everyone’s back.” Sherrod adds: “When our input was ignored and we saw atrocious things being accepted as ‘Ecosystem-based Management’, we disassociated ourselves from it.” Qwatsinas says that the agreement lacked basic mechanisms of accountability or transparency.