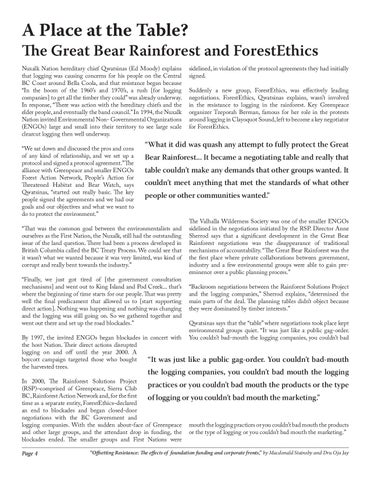 A Place at the Table?

The Great Bear Rainforest and ForestEthics Nuxalk Nation hereditary chief Qwatsinas (Ed Moody) explains that logging was causing concerns for his people on the Central BC Coast around Bella Coola, and that resistance began because “In the boom of the 1960’s and 1970’s, a rush [for logging companies] to get all the timber they could” was already underway. In response, “There was action with the hereditary chiefs and the elder people, and eventually the band council.” In 1994, the Nuxalk Nation invited Environmental Non- Governmental Organizations (ENGOs) large and small into their territory to see large scale clearcut logging then well underway. “We sat down and discussed the pros and cons of any kind of relationship, and we set up a protocol and signed a protocol agreement.” The alliance with Greenpeace and smaller ENGOs Forest Action Network, People’s Action for Threatened Habitat and Bear Watch, says Qwatsinas, “started out really basic. The key people signed the agreements and we had our goals and our objectives and what we want to do to protect the environment.”

sidelined, in violation of the protocol agreements they had initially signed. Suddenly a new group, ForestEthics, was effectively leading negotiations. ForestEthics, Qwatsinas explains, wasn’t involved in the resistance to logging in the rainforest. Key Greenpeace organizer Tzeporah Berman, famous for her role in the protests around logging in Clayoquot Sound, left to become a key negotiator for ForestEthics.

“What it did was quash any attempt to fully protect the Great Bear Rainforest... It became a negotiating table and really that table couldn’t make any demands that other groups wanted. It couldn’t meet anything that met the standards of what other people or other communities wanted.”

“That was the common goal between the environmentalists and ourselves as the First Nation, the Nuxalk, still had the outstanding issue of the land question. There had been a process developed in British Columbia called the BC Treaty Process. We could see that it wasn’t what we wanted because it was very limited, was kind of corrupt and really bent towards the industry.” “Finally, we just got tired of [the government consultation mechanisms] and went out to King Island and Pod Creek... that’s where the beginning of time starts for our people. That was pretty well the final predicament that allowed us to [start supporting direct action]. Nothing was happening and nothing was changing and the logging was still going on. So we gathered together and went out there and set up the road blockades.” By 1997, the invited ENGOs began blockades in concert with the host Nation. Their direct actions disrupted logging on and off until the year 2000. A boycott campaign targeted those who bought “It was just the harvested trees.

The Valhalla Wilderness Society was one of the smaller ENGOs sidelined in the negotiations initiated by the RSP. Director Anne Sherrod says that a significant development in the Great Bear Rainforest negotiations was the disappearance of traditional mechanisms of accountability. “The Great Bear Rainforest was the the first place where private collaborations between government, industry and a few environmental groups were able to gain preeminence over a public planning process.” “Backroom negotiations between the Rainforest Solutions Project and the logging companies,” Sherrod explains, “determined the main parts of the deal. The planning tables didn’t object because they were dominated by timber interests.” Qwatsinas says that the “table” where negotiations took place kept environmental groups quiet. “It was just like a public gag-order. You couldn’t bad-mouth the logging companies, you couldn’t bad

the logging companies, you couldn’t bad mouth the logging