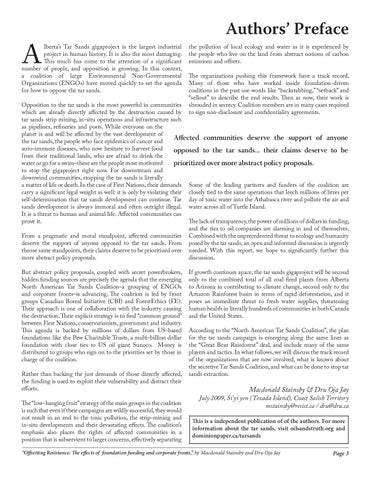 lberta’s Tar Sands gigaproject is the largest industrial project in human history. It is also the most damaging. This much has come to the attention of a significant number of people, and opposition is growing. In this context, a coalition of large Environmental Non-Governmental Organizations (ENGOs) have moved quickly to set the agenda for how to oppose the tar sands.

the pollution of local ecology and water as it is experienced by the people who live on the land from abstract notions of carbon emissions and offsets.

The organizations pushing this framework have a track record. Many of those who have worked inside foundation-driven coalitions in the past use words like “backstabbing,” “setback” and “sellout” to describe the end results. Then as now, their work is shrouded in secrecy. Coalition members are in many cases required to sign non-disclosure and confidentiality agreements.

Opposition to the tar sands is the most powerful in communities which are already directly affected by the destruction caused by tar sands strip mining, in-situ operations and infrastructure such as pipelines, refineries and ports. While everyone on the planet is and will be affected by the vast development of Affected communities deserve the support of anyone the tar sands, the people who face epidemics of cancer and auto-immune diseases, who now hesitate to harvest food opposed to the tar sands... their claims deserve to be from their traditional lands, who are afraid to drink the water or go for a swim–these are the people most motivated prioritized over more abstract policy proposals. to stop the gigaproject right now. For downstream and downwind communities, stopping the tar sands is literally a matter of life or death. In the case of First Nations, their demands Some of the leading partners and funders of the coalition are carry a significant legal weight as well: it is only by violating their closely tied to the same operations that leech millions of litres per self-determination that tar sands development can continue. Tar day of toxic water into the Athabasca river and pollute the air and sands development is always immoral and often outright illegal. water across all of Turtle Island. It is a threat to human and animal life. Affected communities can prove it. The lack of transparency, the power of millions of dollars in funding, and the ties to oil companies are alarming in and of themselves. From a pragmatic and moral standpoint, affected communities Combined with the unprecedented threat to ecology and humanity deserve the support of anyone opposed to the tar sands. From posed by the tar sands, an open and informed discussion is urgently theose same standpoints, their claims deserve to be prioritized over needed. With this report, we hope to significantly further this more abstract policy proposals. discussion. But abstract policy proposals, coupled with secret powerbrokers, hidden funding sources are precisely the agenda that the emerging North American Tar Sands Coalition–a grouping of ENGOs and corporate fronts–is advancing. The coalition is led by front groups Canadian Boreal Initiative (CBI) and ForestEthics (FE). Their approach is one of collaboration with the industry causing the destruction. Their explicit strategy is to find “common ground” between First Nations, conservationists, government and industry. This agenda is backed by millions of dollars from US-based foundations like the Pew Charitable Trusts, a multi-billion dollar foundation with close ties to US oil giant Sunoco. Money is distributed to groups who sign on to the priorities set by those in charge of the coalition. Rather than backing the just demands of those directly affected, the funding is used to exploit their vulnerability and distract their efforts. The “low-hanging fruit” strategy of the main groups in the coalition is such that even if their campaigns are wildly successful, they would not result in an end to the toxic pollution, the strip-mining and in-situ developments and their devastating effects. The coalition’s emphasis also places the rights of affected communities in a position that is subservient to larger concerns, effectively separating

If growth continues apace, the tar sands gigaproject will be second only to the combined total of all coal fired plants from Alberta to Arizona in contributing to climate change, second only to the Amazon Rainforest basin in terms of rapid deforestation, and it poses an immediate threat to fresh water supplies, threatening human health in literally hundreds of communities in both Canada and the United States. According to the “North American Tar Sands Coalition”, the plan for the tar sands campaign is emerging along the same lines as the “Great Bear Rainforest” deal, and include many of the same players and tactics. In what follows, we will discuss the track record of the organizations that are now involved, what is known about the secretive Tar Sands Coalition, and what can be done to stop tar sands extraction.

July 2009, Si’yi yen (Texada Island), Coast Salish Territory mstainsby@resist.ca / dru@dru.ca This is a independent publication of of the authors. For more information about the tar sands, visit oilsandstruth.org and dominionpaper.ca/tarsands