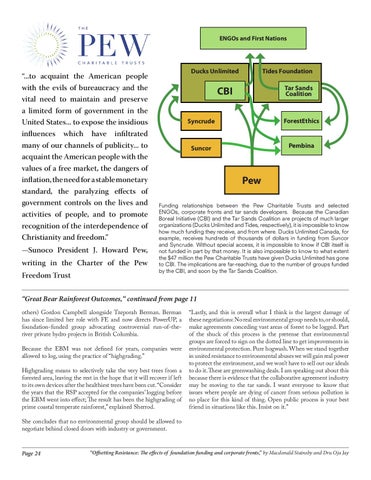 “...to acquaint the American people with the evils of bureaucracy and the vital need to maintain and preserve a limited form of government in the United States... to expose the insidious influences which have infiltrated many of our channels of publicity... to acquaint the American people with the values of a free market, the dangers of inflation, the need for a stable monetary standard, the paralyzing effects of government controls on the lives and activities of people, and to promote recognition of the interdependence of Christianity and freedom.” —Sunoco President J. Howard Pew, writing in the Charter of the Pew Freedom Trust

Pew Funding relationships between the Pew Charitable Trusts and selected ENGOs, corporate fronts and tar sands developers. Because the Canadian Boreal Initiative (CBI) and the Tar Sands Coalition are projects of much larger organizations (Ducks Unlimited and Tides, respectively), it is impossible to know how much funding they receive, and from where. Ducks Unlimited Canada, for example, receives hundreds of thousands of dollars in funding from Suncor and Syncrude. Without special access, it is impossible to know if CBI itself is not funded in part by that money. It is also impossible to know to what extent the $47 million the Pew Charitable Trusts have given Ducks Unlimited has gone to CBI. The implications are far-reaching, due to the number of groups funded by the CBI, and soon by the Tar Sands Coalition.

“Great Bear Rainforest Outcomes,“ continued from page 11 others) Gordon Campbell alongside Tzeporah Berman. Berman has since limited her role with FE and now directs PowerUP, a foundation-funded group advocating controversial run-of-theriver private hydro projects in British Columbia. Because the EBM was not defined for years, companies were allowed to log, using the practice of “highgrading.” Highgrading means to selectively take the very best trees from a forested area, leaving the rest in the hope that it will recover if left to its own devices after the healthiest trees have been cut. “Consider the years that the RSP accepted for the companies’ logging before the EBM went into effect; The result has been the highgrading of prime coastal temperate rainforest,” explained Sherrod.

“Lastly, and this is overall what I think is the largest damage of these negotiations: No real environmental group needs to, or should, make agreements conceding vast areas of forest to be logged. Part of the shuck of this process is the pretense that environmental groups are forced to sign on the dotted line to get improvements in environmental protection. Pure hogwash. When we stand together in united resistance to environmental abuses we will gain real power to protect the environment, and we won’t have to sell out our ideals to do it. These are greenwashing deals. I am speaking out about this because there is evidence that the collaborative agreement industry may be moving to the tar sands. I want everyone to know that issues where people are dying of cancer from serious pollution is no place for this kind of thing. Open public process is your best friend in situations like this. Insist on it.”

She concludes that no environmental group should be allowed to negotiate behind closed doors with industry or government. Page 24