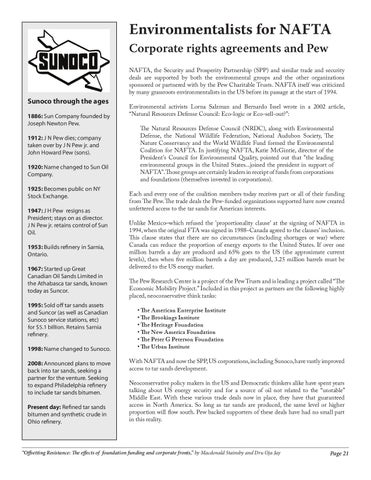 NAFTA, the Security and Prosperity Partnership (SPP) and similar trade and security deals are supported by both the environmental groups and the other organizations sponsored or partnered with by the Pew Charitable Trusts. NAFTA itself was criticized by many grassroots environmentalists in the US before its passage at the start of 1994. Environmental activists Lorna Salzman and Bernardo Issel wrote in a 2002 article, “Natural Resources Defense Council: Eco-logic or Eco-sell-out?”: The Natural Resources Defense Council (NRDC), along with Environmental Defense, the National Wildlife Federation, National Audubon Society, The Nature Conservancy and the World Wildlife Fund formed the Environmental Coalition for NAFTA. In justifying NAFTA, Katie McGintie, director of the President's Council for Environmental Quality, pointed out that "the leading environmental groups in the United States...joined the president in support of NAFTA". Those groups are certainly leaders in receipt of funds from corporations and foundations (themselves invested in corporations). Each and every one of the coalition members today receives part or all of their funding from The Pew. The trade deals the Pew-funded organizations supported have now created unfettered access to the tar sands for American interests. Unlike Mexico–which refused the 'proportionality clause' at the signing of NAFTA in 1994, when the original FTA was signed in 1988–Canada agreed to the clauses' inclusion. This clause states that there are no circumstances (including shortages or war) where Canada can reduce the proportion of energy exports to the United States. If over one million barrels a day are produced and 65% goes to the US (the approximate current levels), then when five million barrels a day are produced, 3.25 million barrels must be delivered to the US energy market. The Pew Research Center is a project of the Pew Trusts and is leading a project called “The Economic Mobility Project.” Included in this project as partners are the following highly placed, neoconservative think tanks: • The American Enterprise Institute • The Brookings Institute • The Heritage Foundation • The New America Foundation • The Peter G Peterson Foundation • The Urban Institute With NAFTA and now the SPP, US corporations, including Sunoco, have vastly improved access to tar sands development. Neoconservative policy makers in the US and Democratic thinkers alike have spent years talking about US energy security and for a source of oil not related to the “unstable” Middle East. With these various trade deals now in place, they have that guaranteed access in North America. So long as tar sands are produced, the same level or higher proportion will flow south. Pew backed supporters of these deals have had no small part in this reality.