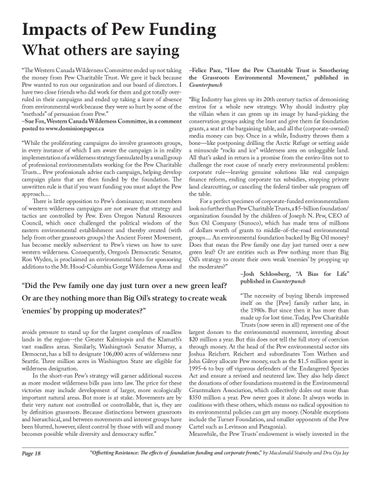 Impacts of Pew Funding What others are saying

“The Western Canada Wilderness Committee ended up not taking the money from Pew Charitable Trust. We gave it back because Pew wanted to run our organization and our board of directors. I have two close friends who did work for them and got totally overruled in their campaigns and ended up taking a leave of absence from environmental work because they were so hurt by some of the “methods” of persuasion from Pew.” –Sue Fox, Western Canada Wilderness Committee, in a comment posted to www.dominionpaper.ca “While the proliferating campaigns do involve grassroots groups, in every instance of which I am aware the campaign is in reality implementation of a wilderness strategy formulated by a small group of professional environmentalists working for the Pew Charitable Trusts... Pew professionals advise each campaign, helping develop campaign plans that are then funded by the foundation. The unwritten rule is that if you want funding you must adopt the Pew approach.... There is little opposition to Pew’s dominance; most members of western wilderness campaigns are not aware that strategy and tactics are controlled by Pew. Even Oregon Natural Resources Council, which once challenged the political wisdom of the eastern environmental establishment and thereby created (with help from other grassroots groups) the Ancient Forest Movement, has become meekly subservient to Pew’s views on how to save western wilderness. Consequently, Oregon’s Democratic Senator, Ron Wyden, is proclaimed an environmental hero for sponsoring additions to the Mt. Hood-Columbia Gorge Wilderness Areas and

–Felice Pace, “How the Pew Charitable Trust is Smothering the Grassroots Environmental Movement,” published in Counterpunch “Big Industry has given up its 20th century tactics of demonizing enviros for a whole new strategy. Why should industry play the villain when it can green up its image by hand-picking the conservation groups asking the least and give them fat foundation grants, a seat at the bargaining table, and all the (corporate-owned) media money can buy. Once in a while, Industry throws them a bone—like postponing drilling the Arctic Refuge or setting aside a minuscule “rocks and ice” wilderness area on unloggable land. All that’s asked in return is a promise from the enviro-lites not to challenge the root cause of nearly every environmental problem: corporate rule—leaving genuine solutions like real campaign finance reform, ending corporate tax subsidies, stopping private land clearcutting, or canceling the federal timber sale program off the table. For a perfect specimen of corporate-funded environmentalism look no further than Pew Charitable Trusts, a $5-billion foundation/ organization founded by the children of Joseph N. Pew, CEO of Sun Oil Company (Sunoco), which has made tens of millions of dollars worth of grants to middle-of-the-road environmental groups.... An environmental foundation backed by Big Oil money? Does that mean the Pew family one day just turned over a new green leaf? Or are entities such as Pew nothing more than Big Oil’s strategy to create their own weak ‘enemies’ by propping up the moderates?” –Josh Schlossberg, “A Bias for Life” published in Counterpunch

“Did the Pew family one day just turn over a new green leaf?

“The necessity of buying liberals impressed itself on the [Pew] family rather late, in the 1980s. But since then it has more than made up for lost time. Today, Pew Charitable Trusts (now seven in all) represent one of the largest donors to the environmental movement, investing about $20 million a year. But this does not tell the full story of coercion through money. At the head of the Pew environmental sector sits Joshua Reichert. Reichert and subordinates Tom Wathen and John Gilroy allocate Pew money, such as the $1.5 million spent in 1995-6 to buy off vigorous defenders of the Endangered Species Act and ensure a revised and neutered law. They also help direct the donations of other foundations mustered in the Environmental Grantmakers Association, which collectively doles out more than $350 million a year. Pew never goes it alone. It always works in coalitions with these others, which means no radical opposition to its environmental policies can get any money. (Notable exceptions include the Turner Foundation, and smaller opponents of the Pew Cartel such as Levinson and Patagonia). Meanwhile, the Pew Trusts’ endowment is wisely invested in the

Or are they nothing more than Big Oil’s strategy to create weak ‘enemies’ by propping up moderates?” avoids pressure to stand up for the largest complexes of roadless lands in the region--the Greater Kalmiopsis and the Klamath’s vast roadless areas. Similarly, Washington’s Senator Murray, a Democrat, has a bill to designate 106,000 acres of wilderness near Seattle. Three million acres in Washington State are eligible for wilderness designation. In the short-run Pew’s strategy will garner additional success as more modest wilderness bills pass into law. The price for these victories may include development of larger, more ecologically important natural areas. But more is at stake. Movements are by their very nature not controlled or controllable, that is, they are by definition grassroots. Because distinctions between grassroots and hierarchical, and between movements and interest groups have been blurred, however, silent control by those with will and money becomes possible while diversity and democracy suffer.” Page 18